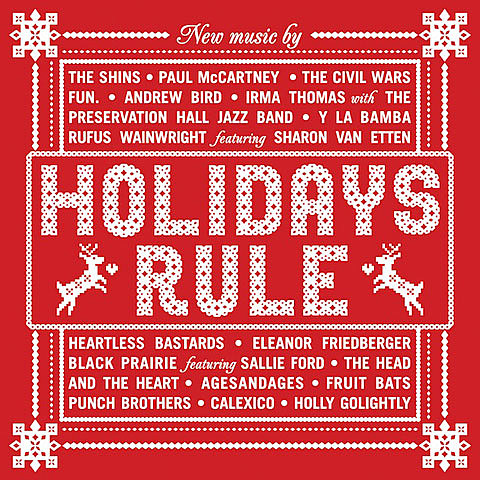 This one gets a big "!!!!". Listen to the song, with more info about the above-pictured new holiday album, below...

Rufus's live set will be streaming from ACL this weekend. Sharon is heading out on a North American tour that hits Town Hall in NYC soon.

AND THE PRESS RELEASE ABOUT THE HOLIDAY CD:

HOLIDAYS RULE, a deliciously diverse collection of seasonal music featuring an array of glittering contributions from across the musical spectrum, will be released by Hear Music/Concord Music Group on October 30th, 2012

"We've had great success working with Nancy and the MPL team on a number of projects," explained Poster. " We thought it would be a lot of fun to record some holiday songs together!"

"I love holiday music," Matarazzo volunteers. "But every year I find myself going back to the standards. I wondered, where's the holiday record for this generation? This was a chance to create something that gave today's artists a chance to put their mark on the tradition."

Matarazzo particularly credits Funk, avid multi-instrumentalist, house producer at Search Party and guitarist for The Decemberists, for the cohesion and community vibe of the project.

Funk oversaw several of the Holidays Rule sessions, notably the very first: "We brought in Y La Bamba to do 'Señor Santa,' which was one of the more challenging songs, and we were really excited by the result," Funk recalls, adding that the band's dreamy, accordion-accented spin on the whimsical tune (a yuletide variation on "Mr. Sandman") helped set the tone for the entire set.

Some of the numerous highlights include fun. whipping up a distinctly postmodern take on the rollicking "Sleigh Ride," adding a frosty techno swirl to the winter perennial.

Paul McCartney continues in the velvety mode of his recent pop standard outing, effortlessly conjuring the warmth of the fireside with "The Christmas Song." "Having him on this record is unbelievable," enthused Matarazzo. "As far as I'm concerned, I could walk on the moon and it wouldn't surpass this." Adds Funk, "Paul nailed it, of course. And the track is so masterfully recorded that you feel like you're in the room with him."

The Shins, meanwhile, take McCartney's own "Wonderful Christmastime" in a cheekily retro direction, turning the track into a musical homage to the Beach Boys. Wainwright and Van Etten deliver a fittingly seductive "Baby, It's Cold Outside."

Funk journeyed to New Orleans to co-produce the Preservation Hall Jazz Band's gorgeous collaboration with Irma Thomas. Grammy-winning duo The Civil Wars, work their intimate magic on "I Heard the Bells on Christmas Day," with only acoustic guitar and their spellbinding vocal blend. Calexico's "Green Grows the Holly" works similarly spooky-rural terrain (with their trademark border-town brass for expressive contrast). Punch Brothers' mandolin-spiced rendition of the hymn "O Come, O Come, Emmanuel" is the most overtly religious track but offers, as Funk notes, "some unexpected twists and turns." On the disc's final track, Andrew Bird harkens back to his Bowl of Fire days with the violin charge of "Auld Lang Syne."

"Either you love the holiday season or you don't," Matarazzo reflects. "But if you do, you're going to sing passionately about it. That was the one constant in all these different recordings - that warmth, intimacy and conviviality - those qualities that bring us all a little closer."