Bobby Canavale and other 'Vinyl' cast 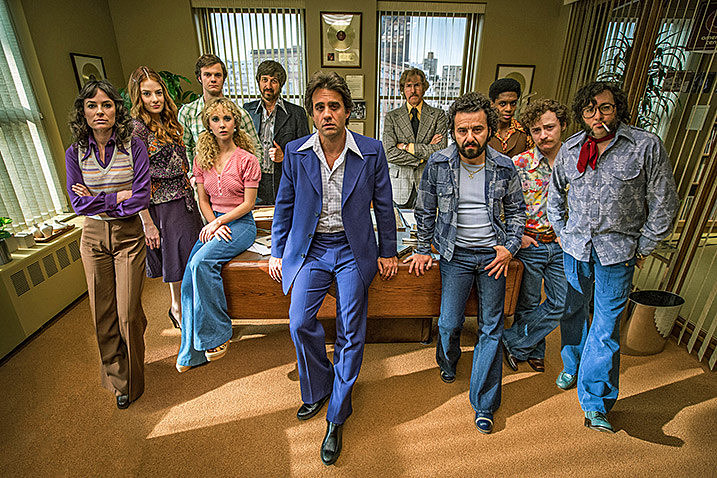 HBO's ambitious new series Vinyl debuts on Sunday (2/14) with a two-hour premiere directed by series co-creator Martin Scorsese. As mentioned, the first of a few Vinyl soundtracks will be out on Friday (2/13) and it features the show's theme song by Sturgill Simpson. "Sugar Daddy" is a bluesy, Zeppelin-type rocker which fits in well with the show's 1973 NYC music biz setting. You can stream it below.

As for the show itself, it's been getting mostly good reviews. New York Magazine's Matt Zoller Seitz loved the pilot:

Beyond its bleak humor and aspirations to cultural commentary, the best thing about the Vinyl pilot is its sprightly "Let's try anything" attitude. It harks back to that period in the '80s when Scorsese was directing medium-budget features that were handsomely produced and had peerless casts but didn't feel entombed by Importance. At Vinyl's best, it feels not like a movie about 1973 but a film from 1973. Scorsese has stripped off the tuxedo and is directing in a dirty undershirt and jeans again, and it's glorious.

Vinyl feels less like the next step in TV drama's evolution than a greatest hits collection. Richie Finestra wants to expose something new to the world when the show he's at the center of -- particularly in its nearly two-hour pilot episode -- is more of a dinosaur rock album. It's capable of great moments -- even on 1973's middling Stones release Goats Head Soup, Jagger and his mates were able to lay down a track like "Doo Doo Doo Doo Doo (Heartbreaker)" -- but through its first five episodes, it's playing variations on tunes you already know by heart.
Read more at

Watch the most recent Vinyl trailer and a couple making-of videos (including one with co-creator Mick Jagger) below...