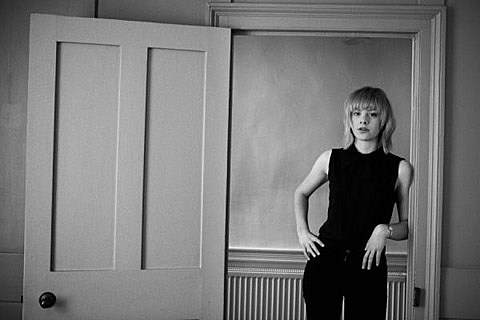 Anika's new and self-titled LP skirts the lines between funk, no-wave, goth, dub, and a mish-mosh of many other genres with Nico-style vocals in front. It's odd, but very compelling, and her accompaniment is nothing short of on point which is to be expected when Beak> (Geoff Barrow of Porsishead, Billy Fuller and Matt Williams) is your backing band. Barrow also produced the record which you can listen to in its entirely below. Watch a video of her Yoko-Ono cover "Yang Yang" down there too. Pick up a copy of the record at her label Stones Throw.

Though Anika has no North American live tour dates scheduled, she will be on hand to DJ a ton of events in the next couple weeks - once in LA and six times in NYC. Three of those NY appearances are free: 2/10 she'll be at Gallery Bar with Blu Jemz, 2/12 at Trophy Bar & 2/14 at The Commodore. The remaining three NY DJ appearances are at Mercury Lounge on 2/9 spinning between sets at the Cubic Zirconia show (tickets), Glasslands on 2/11 where she'll spin in between sets by Javelin, High Life, & Monster Rally (tickets), and finally Santos Pary House on 2/16 as part of the previously discussed Beans show which now also includes Edan(!) with Paten Locke & Bluebird (tickets).

All upcoming dates, that video, and the album stream, below...