photo: The Weaks at MHOW on January 15 (more by Mimi Hong) 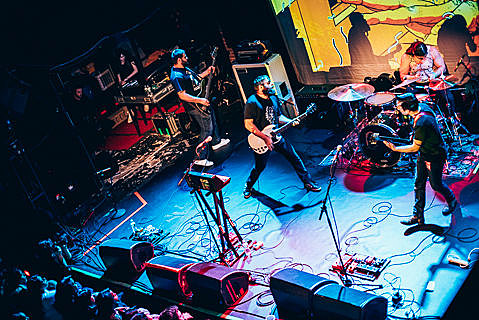 Philadelphia rockers The Weaks have never been afraid to show off their love of '90s indie, and their contribution to the upcoming Lame-O Records United Cerebral Palsy-benefitting 6-way split, Stength In Weakness (pre-order), sticks to that mantra. The soaring guitars and out-of-control nature of "Call Me Away" follows in the footsteps of Dinosaur Jr. with massive riffs and an apathetic delivery, with a hook that lodges itself in your head like Built To Spill's best choruses. We've got the premiere of the track in this post, check it out below.

The split officially drops on February 3rd but you can already check out the contributions from Modern Baseball and Hurry. (Beach Slang and more to come.) The Weaks will also be playing the split's release shows in Philly and NYC with Modern Baseball, Marietta and Spraynard. Both shows are charity sets also benefitting UCP. Tickets for the NYC show, happening Saint Vitus on February 15, are still available.

The Weaks were also one of many bands just added to Asbury Park, NJ's Skate & Surf Festival along with fellow Strength In Weakness contributors Spraynard. Other contributors Modern Baseball and Beach Slang were already set to play the festival. Tickets are still available.

Check out the premiere of The Weaks' "Call Me Away," with an in-studio video from the recording session, below...