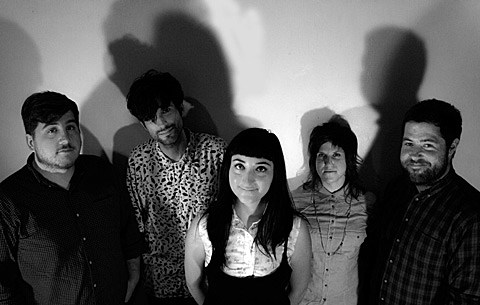 As mentioned, Baltimore's Wildhoney are releasing their debut album, Sleep Through It, at the end of the month via Deranged and Forward! Records. (Pre-orders are available.) While the shoegaze tag is 100% appropriate, as we've noted before, this band are great songwriters first, then apply their myriad pedals after. That said they also really know their way around these kind of dynamics and effects, which all makes for a really enjoyable album. There are definitely more bands doing this kind of stuff than in the early-'90s shoegaze heyday, but Wildhoney stand out in the haze. We posted Sleep Through It's title track earlier this week and the album also contains their great 2014 single "Seventeen." Now you can listen to the whole thing, which we're premiering below.

Wildhoney are on a previously discussed tour right now and will be in NYC soon, playing Silent Barn on January 25 with Weed Hounds, Expert Alterations and Gingerlys, then Cake Shop on February 4 with UK band Leave the Planet, Canada's Beliefs, and Brooklyn's own Dead Leaf Echo. Both those shows have great lineups for anyone who likes shoegazey indie pop.

Album stream and tour schedule below...