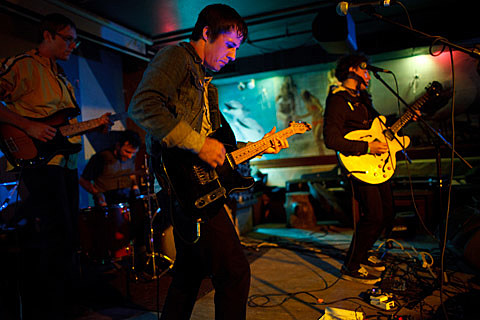 Philadelphia's Literature just released the video for "New Jacket" which is off this year's Chorus, their first album for Slumberland. The hazy visuals, a mix of flowers and live footage fit the breathless rush of the song pretty well and you can watch that below. Last in NYC for CMJ, Literature have no shows on the horizon but they're about to go back into the studio for their next album.

Being the indiepop aficionado that he is, we asked Literature guitarist Kevin Attics to give us a list of his favorite songs from the last year which he did and also turned into a mix for us. Kevin says:

2014 is saying it's goodbyes at the party before it walks assuredly out the door. What did we just experience? The culmination of passion projects labored over for years (A Sunny Day in Glasgow, Gold-Bears), nascent talents throwing out the script (Girlpool, Dripping Wet, Spook School), future legends gathering steam (Flowers, Eternal Summers), and a flourishing musical community that is so tightly bound and dynamic (everyone on this mix). Also, Hurry put out a record I guess.

You can stream Kevin from Literature's "Essential Songs from 2014" mix below...