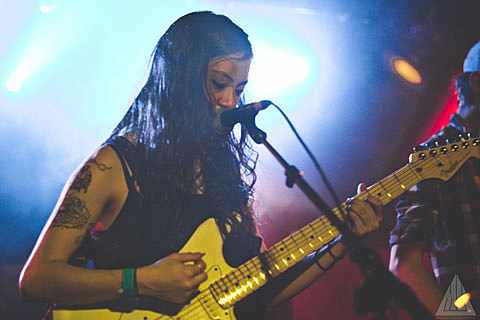 Michelle Zauner, lead singer of Philadelphia indie rock band Little BIg League, is also a solo artist under the name Japanese Breakfast. This past May, she contributed to the Song a Day for a Week blog along with Frankie Cosmos, Eskimeaux, Small Wonder and Florist; and now she'll be compiling those songs plus some other solo material for a cassette titled American Sound & Where Is My Great Big Feeling, due out July 25 via Seagreen Records.

We've got the premiere of one of the tracks from the cassette, "The Woman That Loves You," which initially appeared on a split with Foxing but has been re-recorded for American Sound. Unlike Little Big League's distinctly indie rock style, with Japanese Breakfast Michelle takes the opportunity to experiment with lots of sounds, ranging from bedroom folk to wacky dance music, and "The Woman That Loves You" is the closest we've ever heard her come to new wave. It's a chilly, moody take on the thumping rhythms and earworm melodies of early '80s synth pop, and also a little reminiscent of Fleetwood Mac from that era (but maybe just because the song's title reminds me of that "Silver Springs" lyric). Check it out below.

No live dates for Japanese Breakfast at the moment, but you can catch Little Big League in NYC this Friday (6/13) at Baby's All Right at the BrooklynVegan Northside showcase with Operators (Dan Boeckner's [Wolf Parade, etc] new band) and Motion Studies. Tickets For that show are still available and a limited number of Northside badges will also be welcome.

Song stream, with some info on the cassette from Michelle, below...

Japanese Breakfast - "The Woman That Loves You"

"Little Big League played a show with Frankie Cosmos at Golden Tea in late April. I talked to Gabby and Greta about how nearly a year ago I'd written and recorded a song every day for the month of June. They expressed interest in the project and the next week Gabby made a blog where Eskimeaux, Florist, Frankie Cosmos, Small Wonder and I could post songs.

The blog came at a bad time for me. My mom was having these mysterious medical tests and I suspected it was developing into something serious. I was also up in New York that week to record a separate EP with my friend. When I arrived he was skittish, newly sober, and obsessed with mastering Tai Chi in some attempt to impress an unrequited love interest. We spent the day distracted and awkward. I watched him meditate and pose with a Tai Chi sword on his roof for a half hour.

The songs became incredibly cathartic. I didn't have much time to write or record them. They became more like diary entries, lacking any real narrative. They became pieces of conversation and feelings of anger and defeat. At the end I listened back to this twisted documentation of my feelings and thought about how much life can change in a week. I was amazed how the subjects, sounds and happenings of the four people I shared this project with were all so different and heartbreaking and moving in their own unique way. It is now 6/10/14; I go back to Oregon in one week to be with my mom through the beginning of her chemo. It is another week and another great big feeling."