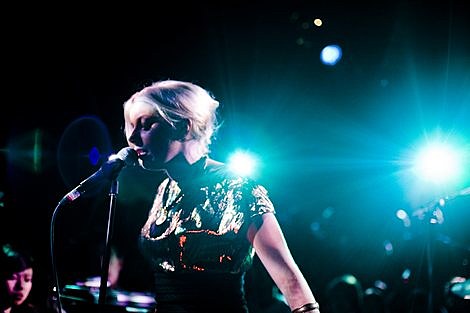 Pop music in recent years has tended towards the prosaic and straightforward, whether it's the Arctic Monkeys' and Lily Allen's tales of urban teenage life, or Coldplay's stadium-filling platitudes about feeling like a puzzle with a missing piece and lights guiding you home. By contrast, Little Boots is an altogether more complicated sell: a female "synth-geek" who has to restrain herself from boring interviewers with discussion of "casual circuitry", and describes her style as "cosmic Coronation Street". "People are really black and white about stuff," she says. "They either want you to be Kylie, where you don't write the music and you're part of the machine, or a singer-songwriter. You can't be seen to be both." [Guardian UK]

Little Boots (aka UK singer Victoria Hesketh) last visited the US in May for a one-off show at NYC's (Le) Poisson Rouge. She'll return to the US in the fall for a couple more shows -- at least four this time. Those include a Wednesday, September 16th gig at the Bowery Ballroom. Tickets go on today at noon; general sale starts Friday, June 12th.

Boots' debut record, Hands, is out now in the UK, but still doesn't have a set US release. That'll come sometime in the future on the newly rebooted Elektra label. Stateside fans get the US-only Illuminations EP, which is out now. The singers' website is currently hosting a free minimix of songs from the new album.

All tour dates, with a video of Little Boots playing a piano cover of Blur's "To The End," below...