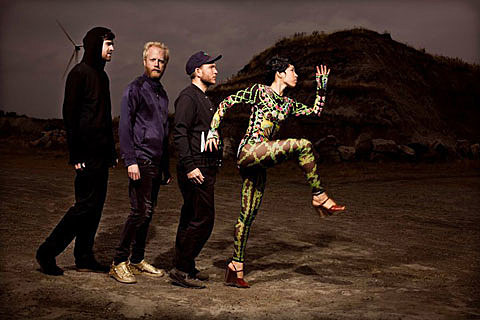 Little Dragon, who are playing the sold out BV presented 'Ritual Union' album release show on August 16 at Music Hall of Williamsburg, have announced an extensive international fall tour in support of the album. That tour mainly includes overseas dates but there are a few stops in the US including Moogfest and one on October 14 at Terminal 5. Tickets for the large NYC show go on sale Friday (7/29) with an AmEx pre-sale starting Wednesday (7/27) at noon. All dates, including an LA show at Avalon, are listed below.

Ritual Union, the band's 3rd LP, was released on Peacefrog/EMI today (7/26). Purchase the album as LP/MP3/CD on Amazon. You can listen to a track below.

SBTRKT's album, which features Little Dragon's Yukimi Nagano on vocals on one track, came out at the end of June. SBTRKT just told Complex:

"I’ve been listening to their albums for a while and I've been a big fan. They seem to have a real, original direction. Every time they put out new material, it's always forward-thinking and changing up and doing something which no one thinks they’ll do. They're not conforming to what other people think is pop music or electronic or any particular genre. Even in terms of live shows, they’re pretty exciting. I was really keen on working with Yukimi, and they were really up for it."

Yukimi's vocals have also been featured on albums by Maximum Balloon (Dave Sitek) and Gorillaz. All Little Dragon tour dates below...