Little Scream at MHOW in May (more by Amanda Hatfield) 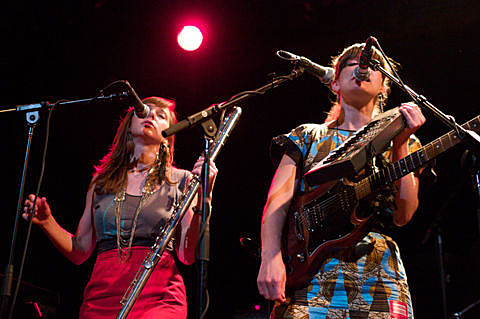 Montreal singer/songwriter Little Scream (aka Laurel Sprengelmeyer) recently finished up some North American dates with BOBBY. She won't be there when BOBBY play Mercury Lounge this Saturday (12/3) (tickets), but Laurel and her band have their own short run of dates which include two NYC shows this week. She plays Pianos on Tuesday (11/29) with Rain Machine (Kyp Malone) and Akua and The Rock Shop on Friday (12/2) with The Hoof & The Heel and Doug Keith. Tickets for the Pianos show and the Rock Shop show are on sale now.

Little Scream filmed a Take Away Show for La Blogotheque this past September. Check out the video of that along with all dates below...

Little Scream | A Take Away Show from La Blogotheque on Vimeo.