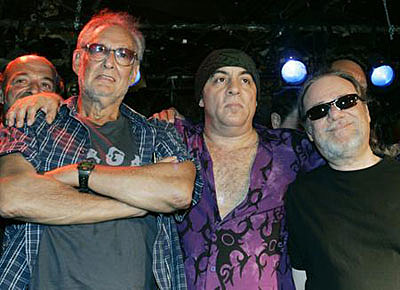 "Losing CBGB meant it was only a matter of time before Hilly followed" said Van Zandt "It was his whole life. He created the space to allow Indie Rock, Pop Art Rock, and Punk to be born. There would be no Ramones without Hilly Kristal. And who would want to live in a world without them? He loved this city and in the end, the city spit in his face."

Catch long-time CBGB supporter Steven Van Zandt (and friends) when he goes on a tour that includes two stops at NYC's MSG in October (during CMJ actually).

Tommy Ramone (seen pictured above with Hilly & Stevie) has a bunch of shows coming up (with his bluegrass band Uncle Monk).