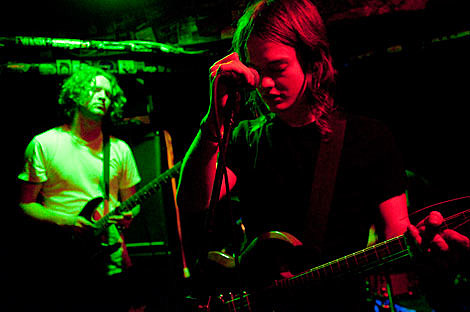 Reminder, Liturgy play The Acheron on 10/2 with Kowloon Walled City and Batillus (who played together at Cake Shop). The show is a one-off, but the band will hit the road for a leg of East Coast dates dates in November. Those dates are below.

The Saturday show is one of two BV/1000 Knives events going down this weekend at Acheron. Sunday (10/3) will see the NYC return of Wormrot with Mutant Supremacy, Defeatist, Psychic Limb, and Curandera. Wormrot and Mutant Supremacy are also scheduled to play Party Xpo with Demilitia and Alekhine's Gun on 10/6 (the same day as Triptykon).

Meanwhile Mutant Supremacy have a new LP, Infinite Suffering, and the 100% DIY effort comes highly recommended for fans of crusty, blackened death metal or Sam/Robert's other sick NYC project, the fantastic Atakke. It rules, so cop it at their myspace, any of the previously mentioned shows or at one of another two dates in the coming month. As previously discussed, on 10/8 the band will support Hellbastard at Europa (tickets) and sixteen days later (10/24), Bowery Electric will host the band alongside Cannabis Corpse and Castevet).

Full Mutant Supremacy and Liturgy dates, as well as some video, is below...