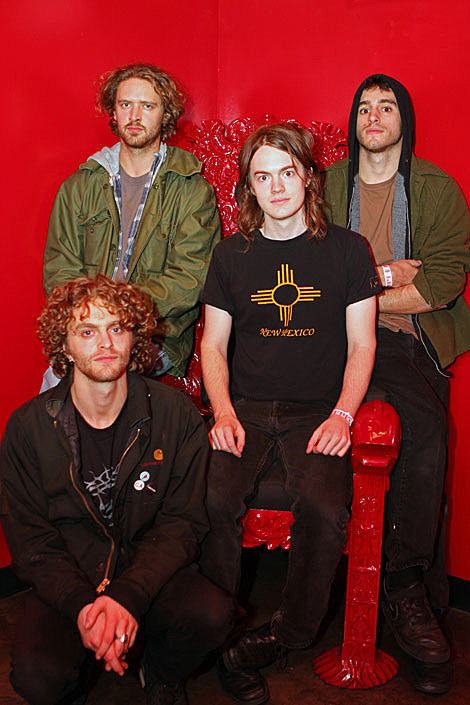 Liturgy has scheduled a tour send-off show on 1/15 at Death By Audio with White Mice, Little Women, and Weasel Walter's Cellular Chaos. The band will be back in NYC action on 2/18 at Don Pedro's with Aa, and then again on 3/6 at Glasslands with Naam.

Liturgy's support at Death By Audio, Weasel Walter's Cellular Chaos, will be reincarnated into another earthly form, that of Marc Edwards/Weasel Walter Group 16 days later. It is that form that will support An Albatross when they play Knitting Factory on 1/31 with Wharton Tiers Ensemble. Tickets are on sale.

So what is Cellular Chaos exactly, and what else has Weasel Walter been up to?

I have left California for New York. I quit XBXRX and joined Behold...The Arctopus. On the docket are my Septet record "Invasion" featuring Kaiser, Golia, John Lindberg, William Winant, Liz Allbee and Damon Smith; studio recordings by the Walter/Halvorson/Evans trio and the Marc Edwards/Weasel Walter Group as well as the new Burmese studio effort. I have reincarnated my west coast guitar freakout band Cellular Chaos on the East Coast with new players. A lot of writing for jazz quintet and tentet took place this year and I'll probably make an attempt to get that music played out here in New York with new musicians. This spring I'm planning on tours with the Forbes/Young/Walter trio as well as some European dates with Sheik Anorak and Mario Rechtern. There's an all-new Toy Killers release slowly in the works . . . I am also preparing to work on a very strange project spearheaded by the legendary Nondor Nevai, featuring myself on bass and Kenny Millions (aka Keshavan Maslak) on reeds - a truly volatile mixture of weirdos, should be extremely interesting. There's some talk about me contributing drums to some new Controlled Bleeding material as well. There are a lot of possibilities and I'm trying to figure out how to juggle them all and still remain solvent. Wish me luck.

Full Liturgy and Weasel Walter dates, as well as a few videos are below...