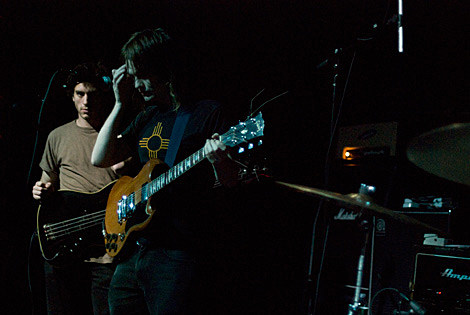 You may know that NYC black metal "transcendentalists" Liturgy have been touring as a duo with a drum machine, but they'll be reuniting with their masterful drummer Greg Fox (and bassist Tyler Dusenbury) for their first tour as a four-piece in a while. It's a short tour in the fall surrounding their appearances at Midpoint Music Festival and Pygmalion Music Festival, and about a month before that, Liturgy will play a hometown show at Brooklyn's Pioneer Works on August 23 (159 Pioneer St) with two Flenser-signed artists, Wreck & Reference (who have a new record out) and White Suns (ditto), and more TBA.. Tickets for that show go on sale Tuesday (7/1) at midnight. All dates are listed below.

The band are also reissuing their 2009 debut, Renihilation, on August 26 via Thrill Jockey, so stay tuned for that.

In related news, Greg Fox also has upcoming dates with his other projects, including an ongoing Guardian Alien tour in Europe and many shows in NYC. He'll play in Zs when they open the previously discussed Arto Lindsay show at LPR on 7/22, which Bigyuki also opens (tickets). Then, Guardian Alien plays Trans Pecos on August 1 with Good Willsmith. Both Guardian Alien and Greg solo play Hudson, NY's BasilicaSoundScape, and Greg plays another solo show in NYC on 9/24 at Roulette with Battle Trance. All of Greg's various dates are listed below.

Watch a full band live video of Liturgy from 2011, with those lists of dates, below...

(all European dates with Guardian Alien unless otherwise noted)