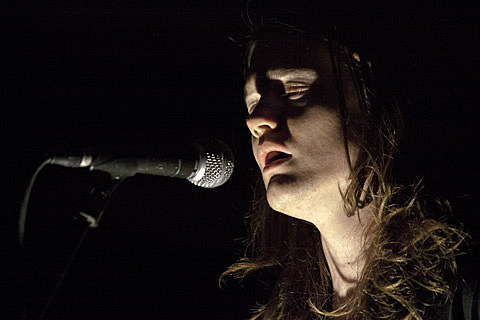 Hunter of Liturgy has offered a rebuttal to Chris Grigg and countless others' criticism of Liturgy. Read his entire statement below.

Liturgy are hitting the road in early July for a string of dates with the spazzy Dope Body followed by shows with Chelsea Wolfe across the US before returning to the area in early August. Full tour dates, HHH's statement, and a never-seen-before live video from their recent Knitting Factory show, is below.

There has been a firestorm of criticism in the metal blogosphere about Liturgy and about me personally (ad hominem) and my ideas. I don't know how to respond directly to it because I don't recognize the object of attack -- it is a phantasm, a caricature, something different from the reality of our band and the reality of my personality, beliefs, aims, vision and so on. All I know is that I am not the arch-enemy of the black metal community, and that the internet is a crazy thing. And yet I'm not totally surprised by the reaction. And, though sometimes it makes me feel bad, at other times it fascinates me ... a chord has been struck somewhere.

So here I offer a few loosely related thoughts on black metal and counterculture: black metal is really profound as a culture and as a musical style -- more so than many people realize. I am very interested in an ethics concerned with ecstasy, the transcendental, and affirmation. Liturgy comes from the intersection of these two ideas. For me, black metal's virtue is that it can, using a combination of history, sound, and audacity, activate a connection to a sort of transcendental field, the perennial occult, the Absolute ... that it touches the spiritual and poetic channels of impossibility that are closed up most of the time. Or, at least, this is a potential within black metal. It can be isolated from other aspects of black metal and enhanced by means of cross-fertilization with other resonant forms of music. The task of Transcendental Black Metal is this isolation and enhancement.

Black metal is both an index of the death of the counterculture tradition and a way to to resurrect it. What right do I have to say that? I have none -- but this business of doing things one has no right to do is crucial to my outlook. I think counterculture lost its way when it turned its back on the revolutionary-spiritual-psychosexual-utopian ambition that gave birth to it and settled for a general attitude of "No." Impotent gestures of resistance to a system which will obviously always easily digest and extract exchange value from those gestures, the formation of little subcultures where people escape reality by congratulating each other for resembling one another - that is a dead, or at least very sick counterculture, one that the system has contained. Today the gestures themselves have almost died out. Mostly I just see cynical tribalism and people wanting to seem cool. That goes for almost every subculture, metal or otherwise. The term "Hyperborean Black Metal" refers explicitly to the explicit nihilism in black metal - but its real referent is the implicit nihilism in all rock; it refers to subculture identification as such, which in my view is ultimately a social neurosis, a blockage, something bad.

An American black metal that uses some BM techniques but combines them with the usual Anglo-American punk attitude is maybe inevitably coming into existence, but that's not what Liturgy is, it's not what I'm interested in. I think music should be global, Universal, not anti-anything or -anyone. It should be anti-anti, if anything. And it should be directed towards the universal goodness at the core of every human being, and it should address each person alone, as an individual. Our music is neither aimed at any particular niche audience, like the "metal community", nor the widest possible audience - it is simply the product of an intense urge, and it is directed in principle to anyone, generically.

Part of what drew me to black metal is the courage of members of the second wave. Something in their attitude allowed them to burst through the counterculture's carcass. That attitude is: grandiosity. I grew up more or less in the orbit of punk, but never really fit into it. It's because I've always had an almost unbearably intense sort of Wagnerian ambition ... the urge to create a system glowing with ethical power ... there's just no place for that in punk. But in black metal there is in fact a place for this ambition. I have a sense of pregnancy, in the sense that Henry Miller or Nietzsche talk about pregnancy. I feel pulled by an urge to create, to give birth to the greatest work of art I can possibly produce, with black metal as a starting point and always as a frame of reference. To generate a cultural product that doesn't just express the despicable state of affairs in the world, but something that, on the contrary, is a spark. Something that triggers a higher state, opens up a possibility. And this amounts to a kind of primordial, cosmic, excruciating "Yes." Aesthethica isn't necessarily product, but it is a step on the way. Maybe the whole thing will ultimately fail and the haters will rejoice. Whatever.

A lot of people don't take metal seriously as art, and a lot of people don't take art seriously as ethics. That's fine, I guess -- but as for myself, I do both. These days, when people detect ambition in someone they leap on that person like hyenas. The label "pretentious" is unquestioned as categorically damning. But I think musical culture could use a whole lot more pretension, if anything. It suffers from false, dishonest humility, and from a lack of ambition to be more than either entertainment or a badge of identification with a group. I think the haters have blinders on, and that they are misdirecting their aggressive energy. Somehow, they are hiding.

I'm interested in the act of declaring something and daring others to disagree; there's something magical about it. So maybe the caricature I mentioned above is exactly what I want. It's like planting a little sprout that gets watered from the frothing mouths of those who are enraged by its existence. It is a part of the child-rearing. My word for this is: "The Arkwork." Liturgy is an Arkwork. It's not just the songs, albums, shows -- it's also the reactions, the suffering, the stigma, the misrecognitions, the resoluteness, the unexpected detours. To be "pretentious," grandiose, to remain faithful to an impossible goal, to stay in contact with one's own desire and follow through with its consequences, unsure of what they will be ... to be real. That's what it is to live, I think, and to spread life. I hardly know why I'm writing this and have doubts that it's a "good idea," but the act is consistent I think with the ethic I'm trying to describe.