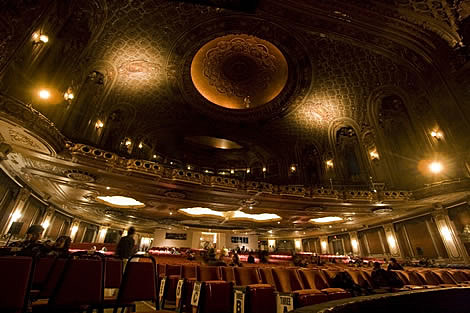 The Loew's Jersey Theatre in Jersey City is one of the last of the grand old movie palaces, having first opened in 1929. Purchased by the city in 1993, it not only shows movies -- an amazing place to see revival fare (they're currently showing The Music Man) -- but also hosts live bands, such as Neutral Milk Hotel recently, Jeff Mangum in 2011, The Magnetic Fields in 2008, and The Decemberists back in 2007 to name a few. Now, according to NJ.com, the Loew's is to undergo a serious renovation, part of an effort by the city's government to revitalize the Journal Square district the theater calls home. Among those vying for the contract are two huge concert promoters -- Live Nation, A.E.G. Live -- and Ace Theatrical Group, which is restoring the Loew's Kings Theater in Brooklyn.

Whichever company gets it, they must meet the city's following conditions:

1) At least thirty (30) community/local performances/events (sponsored and/or produced by local community groups or other City residents), which include but are not limited to school/youth programs, programs for senior citizens, performances
from local artists, lectures or other academic programs, or cultural celebrations

3) At least ten (10) theatrical or other stage performances

6) Allowance for twenty (20) events to be sponsored and produced privately by the Friends of the Loew's Inc. community group

Meanwhile, Friends of Loew's, the nonprofit group that currently handles its booking, is suing for breach of contract.

Ex-Maxwell's and current-Bell House booker Todd Abramson is the man to thank for all the great BV-friendly shows we've seen at Loew's Jersey in recent years, so hopefully he still has a part no matter what happens, or maybe he'll just focus all his energy on new Jersey City venue White Eagle Hall, which we also recently got an update on:

After purchasing White Eagle Hall in November 2012, LoPiccolo began restoration and, together with Levina, started to develop plans for the building's future. They hope to open it in late spring. With Levina serving as artistic director, The Jersey City Theater Center at White Eagle Hall is slated to be an 800-person capacity, flexible-use space for music, dance, theater, and visual arts. Levina is intent on preserving the community-inspired directive of the building's creator. "One big part of our mission is to preserve history in Jersey City," she says. "It's been a golden door for immigrants. For an immigrant coming from another land it's a process. We want to incorporate that history."

The ceiling--and the stained glass--will be fully restored, with some necessary modifications.

Inside the building, laid into the magnificent, sky-high ceiling, are stained-glass portraits of two Polish icons--pianist/composer Frederic Chopin (who is also French, Levina offers during our tour) and opera singer and teacher Marcella Sembrich, who performed with the New York Met and taught at Juilliard.

Today's music lovers from Jersey and beyond will rejoice to hear that Todd Abramson, co-owner of and music booker for Hoboken's legendary Maxwell's, will be booking local and national music acts for White Eagle Hall. He and LoPiccolo hired a top-notch sound company to ensure the stained glass can withstand the vibrations and decibels sent upward in its direction.

Read more at the Hudson Reporter, though Todd tells us that no acts are booked yet. They're waiting for a set opening date to start moving things forward. We can't wait to see it!