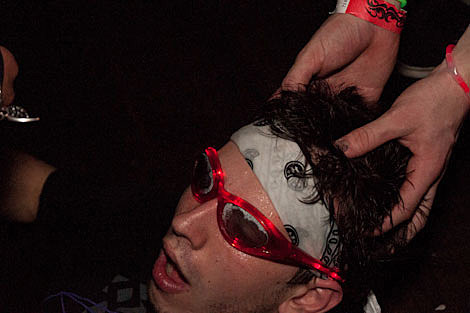 Big money is flowing into electronic dance music. In the latest example of corporate interest in this once-ignored market, Live Nation Entertainment on Tuesday acquired Hard Events, a Los Angeles company that has put on popular festivals and concerts across North America.

Yet such investments are fueling fears that a bubble is taking hold in the world of electronic dance music, or E.D.M., jeopardizing the creative and commercial health of the music. The issue has been intensely debated inside the music business, and recently some of the genre's stars have sounded alarms as well.

"E.D.M. has turned into a massively marketed cruise ship, and it's sinking fast," the D.J. and producer Deadmau5 wrote on his Tumblr page on Tuesday. "All I'm trying to do is put on my life jacket and swim as far away from this shipwreck as fast as I can."

Deadmau5 also recently posted a note on his Tumblr saying "we all hit play", and maybe his fear of sinking cruise ships is why he is not on the lineup of this year's Holy Ship, which by the way is a highly successful venture (that sold out before the lineup was even announced) co-promoted by Bowery Presents AND HARD EVENTS (and that's just one of many events Bowery Presents does with Hard who are now owned by Bowery's biggest NYC competitor Live Nation).