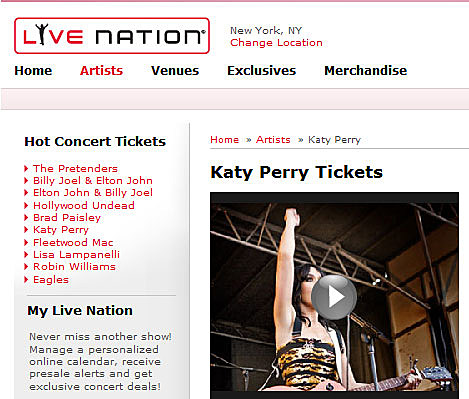 "Live Nation Ticketing is live. The bulk of the world's largest promoter's 10-year contract with Ticketmaster has expired and the company has now launched its in-house ticketing company.

"Anytime you have a major rollout, you hold your breath and hope there are no major glitches," Live Nation CEO of global music Jason Garner tells Billboard. "We went live over the [holiday] break and I didn't hear one complaint from anybody about the system."

Garner admits the rollout was "pretty complex, only because we had a bunch of events that had to be transferred from Ticketmaster over to Livenation.com. The rollout went as flawlessly as we could have hoped. I think in general you'd have to call it a major success."

The bulk of the events transferred from Ticketmaster to Livenation.com so far are club shows, as existing ticketing contracts remain in effect for most larger indoor venues. "What we went live with was our own venues, and no amphitheater shows are up yet," Garner points out. "So it was a bunch of small club shows, which in many ways is more difficult because of the volume."

As the launch moves forward, Garner says the primary facet of Live Nation controlling its own inventory is flexibility. "Our goal is always to have a system built around being able to satisfy what the artists and fans want," he says. "We realize in this economy the guy that gets creative and thinks outside the box on ways to create new revenue is going to win. It's about creating new music products for the fan."....

....It is likely that more Live Nation tickets will be priced "all-in" as opposed to service charges being added on. "We're trying to strip the structural rules off and say to artists, 'How do you want to reach your fan? All-in price, status quo, a lower service charge on the lawn? We're just trying to be real flexible and keep options open so we can serve artists," Garner says." [Billboard]

If you've started to notice you can't find something on sale on Ticketmaster, for a show at Irving Plaza for instance, that's maybe why.