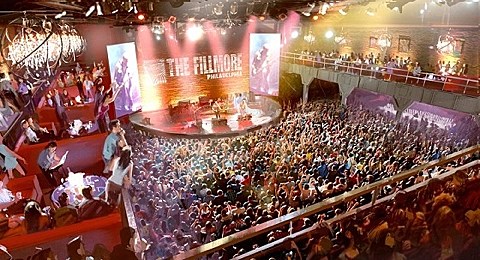 Philly may have lost two venues recently, but they're about to get two new ones. Philly.com reports:

Doesn't look like much from the outside - just the ghostly remains of a century-old smelting and refining facility in Fishtown.

But there's lots of lively banging going on inside the former Ajax Metal Co., across Delaware Avenue from the SugarHouse Casino at Frankford Avenue. Give project developers just a half-year more, they will vow at a press unveiling Thursday morning, and this giant block of gentrifying space will be heating up the 'hood with a $32 million entertainment complex sure to jack up Philadelphia's already competitive concert business.

Two state-of-the-art music venues under one roof - a two-level, 2,500-person-capacity concert hall called the Fillmore and the separate 450-patron Foundry club (plus bars and restaurant) - will anchor the project, run by the House of Blues Entertainment (HoBE) division of Live Nation. The complex promises to be "the most beautiful in our entire chain" of 58 venues, said project champion Ron Bension, HoBE's CEO.

The late Bill Graham, who opened the original Fillmore Auditorium, is getting an exhibition in LA soon.