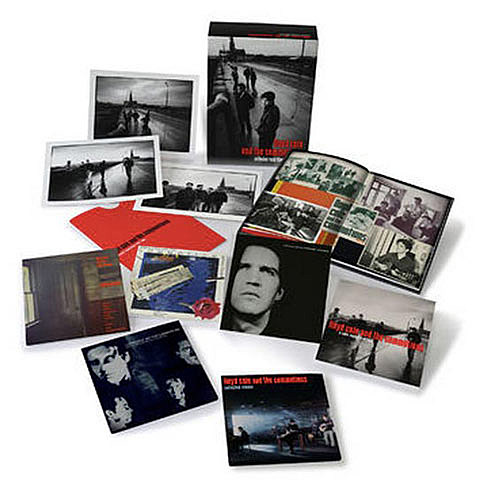 A career-spanning box set of Lloyd Cole & the Commotions, titled Collected Recordings 1983-1989, is coming out June 29. It includes the band's three studio albums which have been remastered from the original tapes whenever possible, as Cole told folks on Facebook:

Easy Pieces original 1/2" tapes didn't survive, I'm afraid. They have been baked etc, but to no avail. Thankfully back up copies were always made and we will be able to remaster the CD from this. Not ideal, but much better than tweaking existing digital files. I've heard the first try with this tape and it's already superior to the original CD and vinyl, but it can be better, so more work will be done. In putting this box together we are trying to reproduce Rattlesnakes and Mainstream exactly as they were when released as we don't think there is room for improvement (sonically), but everyone involved agrees (Clive included) that Easy Pieces could be improved in this respect.

The box set also includes two discs of b-sides, rarities, outtakes and live recordings, as well as a DVD of their videos, TV appearances and live footage. You can check out the tracklist below.

Lloyd Cole will be going on an acoustic tour of the East Coast this spring, kicking things off in NYC at The Bell House on May 30. It's an early show and tickets are on sale now. All dates are listed, along with video of a 1984 concert, below.

Disc one - Rattlesnakes
1 Perfect Skin
2 Speedboat
3 Rattlesnakes
4 Down on Mission Street
5 Forest Fire
6 Charlotte Street
7 2cv
8 Four Flights Up
9 Patience
10 Are You Ready to be Heartbroken?