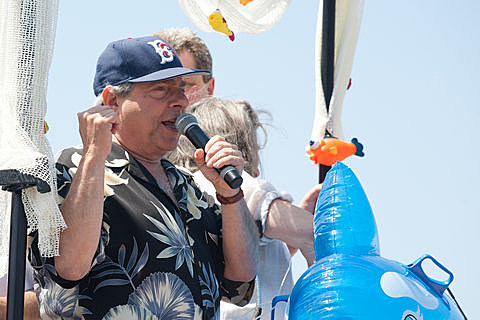 Local synagogues and worshipers filed a lawsuit filed today that threatens to pull the plug on Brooklyn Borough President Marty Markowitz's longtime Coney Island summer concert series - along with his $64 million plan to expand them with a new amphitheater.

The suit, filed in Brooklyn Supreme Court, contends that the existing series violate a city law prohibiting amplified sound within 500 feet of religious institutions when they are in session. It seeks a court order to block future concerts.

Two synagogues -- Sea Breeze Jewish Center and Temple Beth Abraham - are across the street and about 300 feet away from the existing band shell used for concerts at Asser Levy Park. Both say they host services daily.

The seaside concert series is set to kick off its 32nd year of free shows - the 20th at Asser Levy - on July 15 with performances by Neil Sedaka and Brenda Lee.

For decades, no one challenged the concerts, but now the synagogues and many Brighton Beach residents who reside in the high-rises next to Asser Levy Park are furious over the Beep's plan to expand the shows with a new 8,000-seat amphitheater. [NY Post] (thx CJ)

The Neil Sedaka/Brenda Lee kick off show on July 15th is just one of seven Thursday night concerts scheduled for Asser-Levy Park this year, and, as the article says, the synagogue members are just pissed at Marty's plan to replace the current bandshell with the new amphitheater. In response to that Marty told the Post, "I never would have thought that in my lifetime a Jewish synagogue would try to take away joy and happiness from tens of thousands of Brooklynites out of spite."