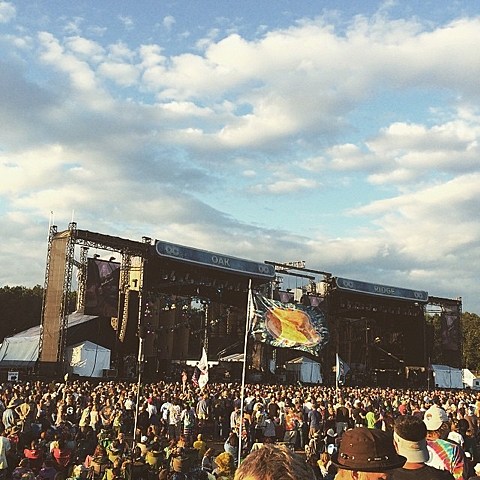 Virginia's Lockn' Festival wrapped up Sunday (9/13) after two successful previous days. The biggest highlight of day 3 was another set from Led Zeppelin frontman Robert Plant and his band The Sensational Space Shifters, whose day 2 set was fantastic. The Sunday set was a similar idea and did have a few repeats in the setlist, but also gave us a few treats we didn't get on Saturday like "Going to California" and "Babe I'm Gonna Leave You."

Sunday also included Gov't Mule, whose frontman Warren Haynes spent a lot of time on stage this past weekend. He sang for the Phil Lesh & Friends featuring Carlos Santana set on Saturday which we wrote about, and immediately after that he headed to the Blue Ridge Bowl side stage for a Gov't Mule late-night set. After Mule's set on Sunday, he appeared on stage yet again to guest with Widespread Panic. It's Warren's first year since The Allman Brothers Band ended -- and also the 20th anniversary of Gov't Mule's debut album -- and clearly he's still going strong and keeping that Southern rock/blues/jam sound alive and well (he played a couple Allman songs too).

Warren is also touring soon in support of his new solo album Ashes & Dust, which came out earlier this summer on Concord. It's a little folkier than his Gov't Mule stuff, and well-matched support on select dates comes from recent country breakout Chris Stapleton and Justin Townes Earle. The album features his and Grace Potter's oft-performed cover of Fleetwood Mac's "Gold Dust Woman," which you can listen to below. Warren's backing band for the tour includes Jeff Sipe and ChessBoxer.

There's one NYC-area date with Chris, October 1 at Capitol Theatre (tickets), and also one with Justin, October 7 at the Space at Westbury (tickets). All dates are listed below.

If you haven't yet, check out recaps and pictures of Lockn' day one and Lockn' day two.