photo: Locrian at Saint Vitus in 2013 (more by Greg Cristman) 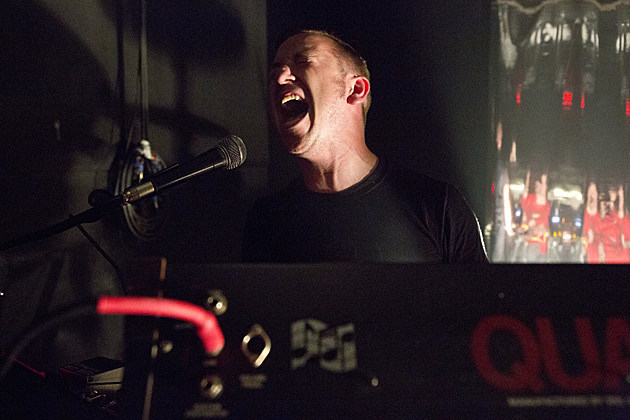 Unless you're one of those people who can't stand screaming at all, Infinite Dissolution is a record that should impress fans of most forms of non-commercial rock music (metal and non-metal included). The harsh, heavy parts are there, but it's often a very beautiful record. It never goes so far into drone that it would turn off someone who likes a little more accessibility, but it never succumbs to traditional rock song structure either. The production is great (the drums especially sound fantastic), and the way it brings together synths with distorted guitars is seamless. Infinite Dissolution isn't the only album this year to combine elements of black metal with less evil sounds, but it doesn't sound quite like much else coming out at the moment.

I wrote the above last month about the new Locrian album, Infinite Dissolution, one of the most widely-appealing heavy albums I've heard this year. Since then, the band began announcing shows in support of it.

While a full tour hasn't been revealed yet, a few dates popped up including NYC on September 14 at Saint Vitus. Tickets for that one are on sale now.

UPDATE: More dates were announced and Insect Ark is opening the NYC show.

They initially planned to tour the West Coast this week and next but those shows were cancelled. All dates are listed, with the album stream and the video for "Arc of Extinction," below...