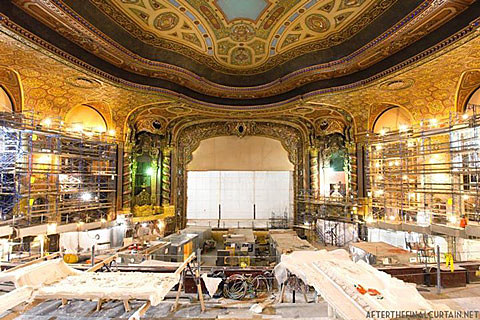 photo by Matt Lambros via the theater's Facebook page.

Long in the planning, the restoration of the classic Loew's Kings Theatre on Flatbush Ave. is currently underway (see photo above) with hopes to open in 2015. Houston company ACE Theatrical Group is handling the $93 job (which was initiated back in 2008 by then Borough president Marty Markowitz). From an article in the New York Times last year:

Built in a more opulent time for a more populous Brooklyn, the Loew's Kings at 1025 Flatbush Avenue has spent more than three decades in New York City's hands. The struggling old movie palace, which once accommodated 3,600 theatergoers, closed not long after the 1977 blackout. The property was seized for nonpayment of taxes.

Would-be rescuers, Magic Johnson among them, came and went. The Kings never fully lost its haunted Hollywood grandeur, but its glory was draining away.

Today, however, seemingly in concert with the revitalization of Brooklyn, the Kings has begun to dazzle again. Plasterers and painters are back in charge. There is visible reason to believe the ACE Theatrical Group of Houston when it says the theater will reopen in 2015.

The King's Theatre was one of the five Loew's Wonder Theatres, all in the NYC area, that included the Loew's Jersey City which is also about to undergo restoration and is holding concerts as well.

Meanwhile, construction also continues on Marty's other big music venue project, the new amphitheater in Coney Island (where there will meanwhile be no Seaside Concert Series this summer).