No Age on Lamar Pedestrian Bridge (more by Leia Jospe) 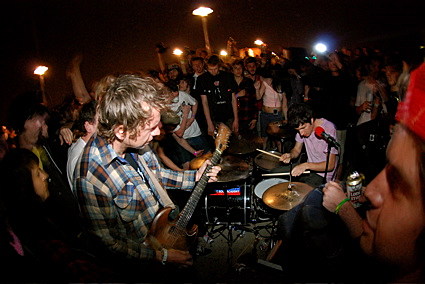 As mentioned, No Age release their awesome new record Nouns today (and Pitchfork gave it a very high score) (and it is streaming at Spinner). And as you know, No Age play a show at Bowery Ballroom (again) tonight (May 6) with High Places and Fiasco (and No Age played a show last night for FADER).

"Even on a day when Nine Inch Nails have suddenly dropped a late Easter present of a surprise free album, No Age have completely dominated internet music-chatter." [Status Ain't Hood]

MTV News recently did a feature on lo fi music. Bands they highlighted include Jay Reatard, Times New Viking, Tyvek, Psychedelic Horseshit, and of course No Age. Download a related, free mixtape HERE or just listen to the muxtape. Watch the MTV News video below.

Lots of other people have recorded and released No Age video too. You can watch No Age play in Other Music, watch them play ping pong with Vice, watch them play in Juan's Basement for Pitchfork TV, watch them play in that vegan food store, and watch them in their practice space. They also played in Amoeba Records and those videos are below (along with the MTV one).....