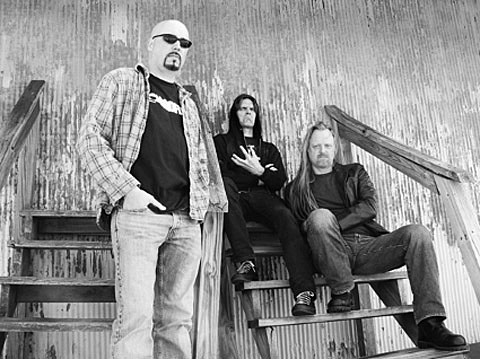 With a few notable exceptions, the combination of the terms "progressive" and "Instru-metal" are enough to send me into a drooling mini-coma of cavernous fucking boredom. Loincloth is one of those exceptions.

Lets be frank, the name Loincloth and their debut album Iron Balls of Steel screams images of fantastical dragon battles, the Heavy Metal soundtrack and Manowar, but this couldn't be farther from the truth. The North Carolina band (featuring ex-members of the much lamented, and now reunited Confessor) specialize in a particularly brutal brand of technical (but not overbearingly so) metal, so it's obvious that their name, album title, and songs like "Underwear Bomb", "The Moistener", come from a deviant sense of humor (the best kind) and not any overtly apparent devotion to Boris Vallejo.

Loincloth definitely fall into that sweet spot between technicality and no-frills punishment, a groove (figuratively and in a musical sense, literally) occupied by the like-minded East of The Wall and Dysrhythmia. Loincloth isn't concerned with technicality for its own sake, but more in search of the perfect riff/associated bangover on their debut LP Iron Balls of Steel due on January 17th, 2012 via Southern Lord. Stream a pair of tracks from the LP for the first time below.

Make sure and catch Confessor at Maryland Deathfest 2012, Tickets are on sale.

Song streams and "video" of some other tracks are below.