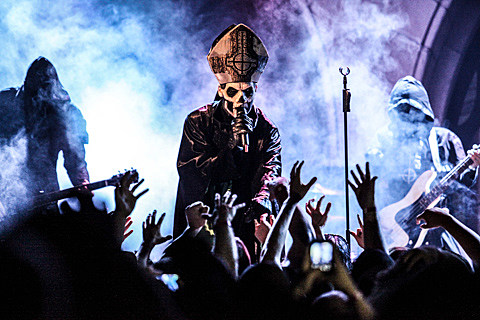 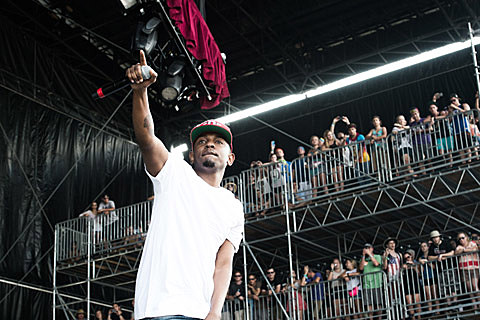 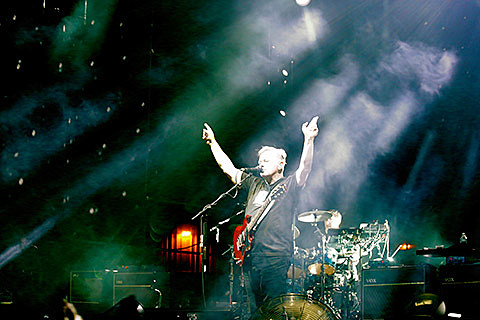 Lollapalooza 2013 happens this weekend (August 2 - 4) in Chicago's Grant Park (and some of it will stream online). We'll be there watching bands on all the stages and hosting them in the Soundwave Tent every day from 1 PM - 3 PM (and from 12:40 on Saturday).

The Lolla line-up is pretty great this year, full of big names with a lot of choices (and the occasional tough decision to be made between competing stages). Here are thirteen bands (plus a few more) we don't want to miss....

New Order - Back together again, sort of, and even though we wish Peter Hook was still in the band, Bernard Sumner, Gillian Gilbert and Steven Morris seem to be having a great time giving the crowd what they want (the hits).

Queens of the Stone Age - Sometimes you have to make the tough decisions. But the big, glammy riffs made by Josh Homme and co make a good argument for missing New Order (who play at the same time).

Ghost BC - We partially just want to see what those costumes look like in the light (at 2:15 pm on the Bud Light Stage Friday). You can also find out at 1pm the same day with us in the Soundave tent.

Baroness - The closest thing we're getting to metal all weekend (sorry Ghost)... not counting the BrooklynVegan afterparties at Ultra Lounge, of course.

Chance the Rapper - The up-and-coming Chicago rapper is having an amazing year and his BMI stage-headlining set at 6:50 PM on Friday should be a celebration.

Kendrick Lamar - No longer up and coming, Kendrick put out one of the greatest and most acclaimed hip hop albums of the past year and for those familiar with it, his live show can be equally orgasmic.

Angel Haze - She might not have big hits like some of the other rappers playing Lollapalooza (Kendrick Lamar, Azealia Banks), but even if you're less familiar with Angel Haze, her live show will impress. She's promising a debut album too, and what we've heard from it is all sounding pretty great.

HAIM - While the sisterly trio have yet to release their debut album, their canny mix of Fleetwood Mac and '90s pop (and big hooks) is ready-made for festivals.

Father John Misty - Funny, talented, good looking, and one hell of a showman. Joshua Tillman has it all!

Disclosure - Though we'd rather see this English electronic duo at midnight in a club, the songs are undeniable and stuck in our head. So, it'll be a Friday 6pm dance party at The Grove, and we're counting on fellow Londoner Jessie Ware who plays 3 hours earlier on Petrillo to show up and sing her part.

The Postal Service - Ben Gibbard, Jimmy Tamborello, Jenny Lewis and company are are bringing us one of the biggest, most exciting and sweet sounding reunions of the year.

The Cure - Much like New Order ("very much, New Order ," New Order might argue), The Cure know how to play to a festival crowd and will deliver their biggest songs to an adoring (if somewhat mopey) crowd.

Nine Inch Nails - Trent Reznor and crew are back with new album Hesitation Marks. This will be a good chance to hear those songs a month before the album's release. And "Head Like a Hole" and "Closer," and "The Day the World Went Away," of course.

Deap Vally - these ladies rock hard (in their underwear).

School of Rock - performing every day at Kidzapalooza, these are some truly talented minors and the undiscovered rock stars of the future.

Local Natives - bring on the harmonies.

For a more in depth look at who is playing the fest on Friday, head to BV Chicago (and stay tuned for Saturday and Sunday previews as well)