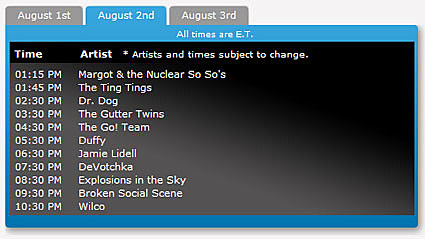 The road that Lollapalooza built in Chicago for Texas promoters C3 Presents could lead to the 2016 Olympics, if C3 co-founder Charlie Jones has his way.

"I would love nothing more," Jones says. "I don't think there is any doubt the city will get the Olympics ... [and] when they get it, I would love nothing more than to help the city bring that event to the world. Public assembly is my passion. And I feel we're very good at it. There are people in the city who have seen our attention to detail and we run a pretty tight ship, and I think we are educating other event producers in town on how to elevate their game. I hope we get the opportunity, whether working any of the Olympic arenas or stuff that happens around it, or helping the city prepare for it. I'll be in the bullpen waiting."...

...Next weekend [August 1-3], more than 100 bands will play Lollapalooza over three days in Grant Park, and Jones says it will be the biggest festival yet, with capacity audiences of 75,000 expected all three days. Indeed, the 2008 edition of Lollapalooza has the most enticing lineup of headliners booked by any major North American festival this year: Radiohead, Rage Against the Machine, Nine Inch Nails, Kanye West and Wilco. [Chicago Tribune]

Stay tuned to BrooklynVegan for coverage of this weekend's festival by Bao Nguyen, Zach Dilgard and others. Stay tuned to AT&T Blue Room for a live stream from the event. Stay tuned everywhere to find out if Obama's rumored appearance at the festival really happens. He's still not listed on the schedule.