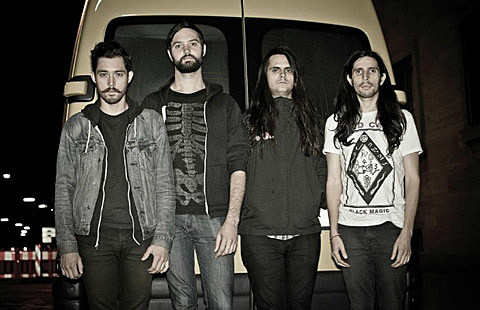 There is something intangible that makes a good record great, a threshold crossed that transcends production style, songwriting, guitar tone, and everything else that is supposedly so important. It's a mix of emotion, heart, urgency, and a "je-ne-sais-quoi" that trumps it all, and Loma Prieta have it on their Deathwish debut I.V.

Screamo is sort of the dirty-word for the emotional-spazz-hardcore that Loma Prieta (members of Punch, Beau Navire, Us Haunted Bodies) specialize in, but the California crew also mix in Converge-style riffing, post-rock grandeur and blast beats into their pg.99-isms. It all makes I.V. an interesting ride, and you can stream two tracks from the LP, "Uniform" and "Fly By Night" (not a Rush cover) below. Order your copy of I.V. at Deathwish or your favorite distro, it ships next week.

So far Loma Prieta only have one date to speak of (in New Zealand) but we'll keep a look out for new ones; they are quite the fun live band.