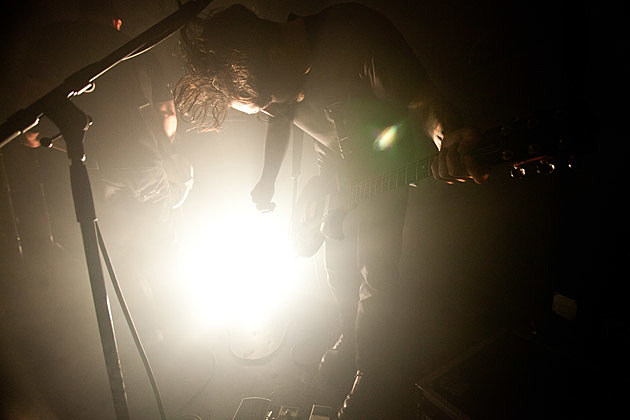 photo: Loma Prieta at Saint Vitus in May (more by Amanda Hatfield)

Loma Prieta's new album Self Portrait comes out in a week (10/2) via Deathwish, and the whole thing is streaming now. As the early singles hinted, it's a screamo/post-hardcore album, but it doesn't just stick to those genre's rules. "There are things you just can't do as a "hardcore" band, you can only go so far before you aren't neatly fitting into that genre and that never really interested me," co-singer/guitarist Sean Leary tells SPIN. From listening to Self Portrait, that mindset feels pretty clear. It's actively pushing the boundaries of these styles on each song.

It was produced by Jack Shirley, who's helmed similar mixes of aggression, passion, and melody for State Faults, his own former band Comadre, and the new Deafheaven album which drops the same day as Self Portrait. He knows how to make a band like this sound larger than life, and with Loma Prieta he does so while also keeping them raw, noisy and confrontational. The record does have moments of beauty -- second track "Black Square" is particularly catchy and the six-minute album closer "Satellite" is quite an uplifting, grand song -- but mostly this is dark stuff and it's perfect for the approaching colder weather.

Listen to a YouTube stream of the whole album (which includes the video for opener "Love") below...