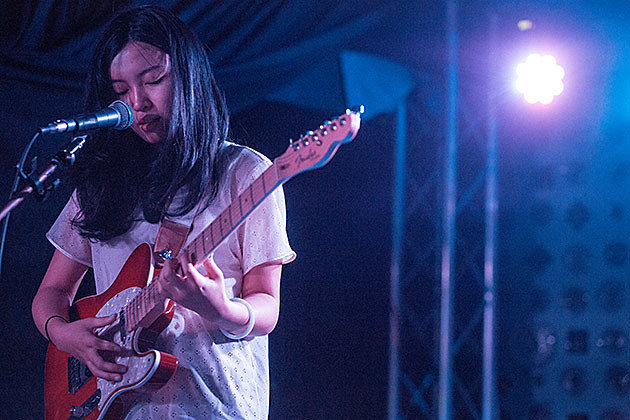 New Brunswick's Long Beard (the project of Leslie Bear) followed up on the promise of her early songs with her debut album Sleepwalker that came out on Team Love (order yours) around the same time she played BrooklynVegan CMJ. The album's a mix of slowcore, indie folk, dream pop and more, and it almost never even happened:

"I never thought I would finish making this album," Bear told The FADER over email. "I wrote these songs in a span of about four years, and loosely recorded scraps of it at home. It was a dark time for me when I had pretty much no confidence, and was close to giving up on music entirely. Having a full-length album seemed like an unrealistic fantasy, and I struggled to feel comfortable enough to complete it. However, I found so much support from my friends and the community that it gave me hope as a musician, and pushed me to keep writing and finish the album. I am truly lucky to be able to finally share this with everyone."

Since the album's release, she made a ghostly video for its song "Turkeys," directed by Anthony Palma. We've got the debut of that video in this post, and you can watch it and stream the whole album below.

Long Beard plays around the NY/NJ area a lot, and as usual she has a bunch of shows coming up. Two are in Brooklyn and they're both solo sets by Leslie (they're often a trio): December 27 at Shea Stadium and December 29 at Baby's All Right. No word yet on the full lineups for those shows, but stay tuned. All dates are listed below.