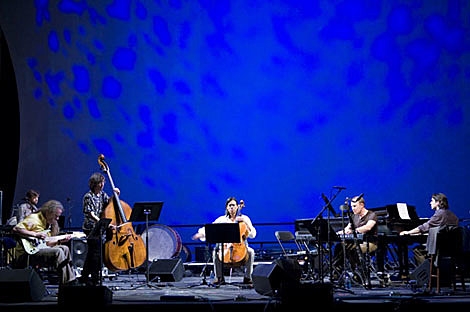 New work by Dirty Projector David Longstreth is OFF THE PROGRAM for the Bang on a Can All-Stars People's Commissioning Fund (PCF) concert on April 2nd at Merkin Hall. Maybe it has something to do with Longstreth currently playing Europe with Dirty Projectors, or the host of other shows the band has planned (including the Longstreth new-composition debut scheduled with Björk at Housing Works Bookstore & Café on May 8th).

The spot on the April 2nd concert is being filled by a piece composed by guitarist and Downtown muscian Fred Frith...

Fred Frith, the English guitarist and composer...is one of the more respected figures in the gray area of music where rock meets the avant-garde. A Dadaist improviser with a streak of the mystic in him, Mr. Frith, like that granddaddy of avant-gardists John Cage, finds music in everything that clanks, squeaks, rattles and hisses. He can turn just about anything lying around the house into a musical instrument. And in one sequence, he and some friends give an impromptu backyard performance of bossa nova music using rhythm instruments made of empty bottles and other household debris. [NY Times]

Tickets for the event are still on sale. Also on the bill for that night is "How Deep Are Rivers? (A Map is a Good Piece of Paper)," the "New York Premiere of a live collaboration with Lee Ranaldo of Sonic Youth." Full program below.

The next scheduled Bang on a Can event (this time in collaboration with Wordless Music) takes place at LPR on April 22nd, with So Percussion performing as part of supergroup Signal. Tickets are available for the show, which will feature Bang on a Can founder Michael Gordon's Trance played in its entirety. Later this spring, both the Bang on a Can All-Stars and So Percussion will play the Look & Listen Festival 2009 in New York (May 1-3).

But before that, So Percussion plays at the MATA Festival (for young composer new-works) on Saturday, April 4th at (Le) Poisson Rouge. (Tickets are on sale.).

The group then performs with Matador band and Björk collaborators Matmos (and special guests PLOrk, the Princeton Laptop Orchestra) at The Kitchen on Friday, April 10th and Saturday, April 11th. Tickets for both Friday and Saturday are on sale: "All three [acts] will share the stage to preview songs from an upcoming collaborative album, as well as new arrangements of music from Matmos's Supreme Balloon and So Percussion's Amid the Noise."

Program for the April 2nd concert and videos from 1990 avant-doc on Fred Frith, Step Across the Border, below...