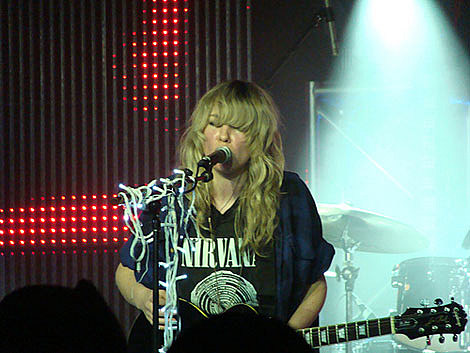 "New Zealand Eighties revivalist Ladyhawke ran through an extremely polished set of tightly arranged synth-rock. Opener "Dusk Till Dawn" shimmered with Scissor Sisters boogie, "Magic" throbbed with the power of propulsive but eerie disco and "Another Runaway" recalled both Donna Summer and Pat Benatar with its anthemic yet glittery vibe. Singer Pip Brown stood anchored center-stage strumming her guitar while warm washes of keyboards saturated the night sky and her tight band pulsed along. Picking out the '80s tunes the group was referencing was a popular exercise (the theme from "Fame"! The opening of Van Halen's "Jump"!). Wrapping with a three-song whammy of "Back in the Van," "Paris Is Burning" and the big, bold single "My Delirium," Ladyhawke definitely brought the party, though the tunes could have used a bit more build-up-and-break-down dynamics. "My Delirium" got a few hands in the air -- and what looked like a flying saucer in the sky -- as Ladyhawke made a fairly strong case for herself as the indie rock Lady Gaga. The sound may be familiar, but it sure is fun." [Rolling Stone @ SXSW]

Ladyhawke's US trip continues with two shows in NYC this week. Tonight (3/24) at Bowery Ballroom is sold out, but tickets are still available for the Thursday show at Studio B.

Also here from overseas and SXSW, Camera Obscura kick off their two-night, both-sold-out, NYC run at The Bell House tonight (3/24).

"You really had to feel for Camera Obscura. The Scottish indie pop sextet's first U.S. performance in a long while had them practically begging audience members to stick around. Of course, while the crowd hemorrhaged members, that had nothing to do with the band -- they were the final act in a long night and after a full day of partying most in the audience were tired, hungry and ready to head out. By the time lead singer Tracyanne Campbell belted out the final song, a rollicking, enthused "If Looks Could Kill," from 2006's "Let's Get Out of This Country," the venue was only at about one-third capacity." [Austin 360]

That's the problem sometimes with the semi-random and long bills that get put together at SXSW. Anni Rossi and Shelley Green open tomorrow's Camera Obscura show at Mercury Lounge. Laura Cantrell opens tonight at the Bell House where Victoria Bergsman (Taken by Trees, the Concretes) will also be acting as DJ.

Not at SXSW, Bloc Party also kick off a two-night run in NYC tonight. Longwave are opening both sold-out shows at Terminal 5.