Lonnie Holley at MHOW in 2013 (more by Amanda Hatfield) 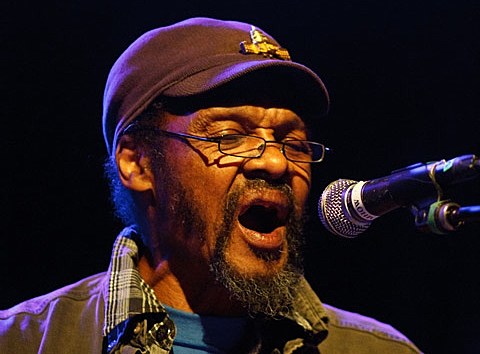 Outsider artist Lonnie Holley, who we wrote about around the time of his shows with Deerhunter and Bill Callahan and who has made fans out of (and since collaborated with) Deerhunter's Bradford Cox and Black Lips' Cole Alexander, will return to NYC for two shows this week. First, he plays a night show on Tuesday (4/15) at Baby's All Right with no wave legend and experimental composer Arto Lindsay (of DNA and others), and Georgia. Georgia also joins Lonnie for his set, and maybe Arto will too? Tickets for that show are on sale now.

Then on Saturday (4/19) for Record Store Day he plays a 1 PM in-store at Other Music. The two NYC shows are Lonnie's only currently announced dates.

Other Music, which will turn 20 next year, will open at 10 AM for RSD. It doesn't quite have the room for in-store performances and shopping at the same time (like at Rough Trade), so they have up to this point just booked musicians as DJs. Lonnie's set will be the one actual live performance this year though. The rest of the day is DJs and the lineup includes Pop. 1280, Com Truise, Xeno & Oaklander, Pete Swanson, Matana Roberts and more. Full schedule is listed below.

Lonnie Holley - "From the Other Side of the Pulpit" (ft. Bradford Cox, Cole Alexander)