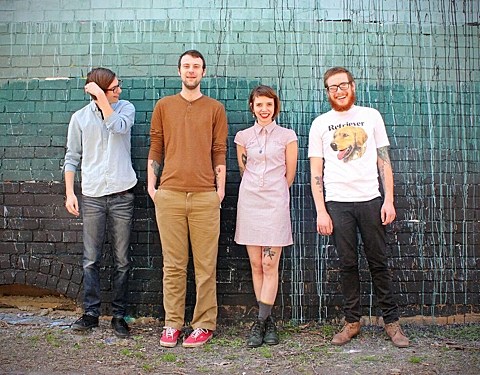 Springfield, IL's Looming is the indie rock band led by Jessica Knight, who also plays bass in the hardcore band Asthma and in Mother Leopard (whose only music online appears to be a 2011 demo from before she joined). They also have a former member of the mewithoutYou-ish Our Lady, who have an upcoming hometown show that Jessica opens with a solo set.

Looming released a self-titled EP in 2013, and they've since signed to No Sleep, who will release their debut album, Nailbiter, on August 14 (pre-order). We've got the premiere of first single "Onward" in this post. Both that song and the EP are the kind of folky, poppy, punky stuff that fans of Hop Along, Radiator Hospital, Cayetana, and more in that realm would probably dig. Like all of their singers though, Jessica has a sound of her own which makes Looming stand out against other similar bands. Listen to the new song and the EP, below.