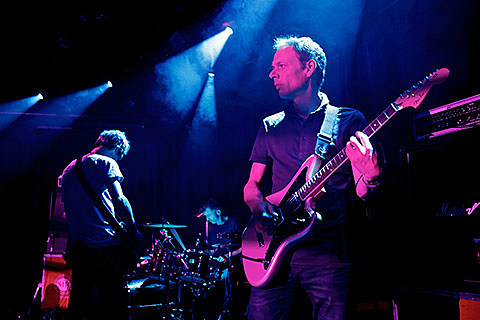 UK psych band Loop got back together a couple years ago for ATP End of an Era, and then toured around Austin Psych Fest last year, including a show at Le Poisson Rouge here in NYC. Now they're back in the studio, with three releases due out this year. The first of which is Array 1 which will be out June 22 via ATP. The four-song, 32-minute platter (EP? LP? Mini-LP?) is the first new music from LOOP since 1990's A Guilded Eternity and features the current lineup of Robert Hampson (vocals/guitar), Hugo Morgan (bass), Wayne Maskell (drums) and Dan Boyd (guitar). Stereogum debuted "Precession" from it today which, like most of their music, builds on one riff and expands. There is more than a little '90s alt-metal (Hum or Quicksand at their droniest) here as well. Check it out below.

The band will be playing some dates in the UK around Array 1's release and those are listed below.