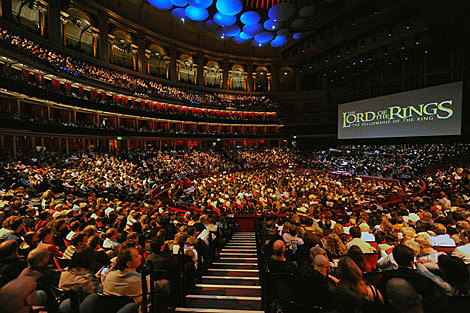 The music of Lord of the Rings: Fellowship of the Ring is being performed in full with the film at Radio City Music Hall in NYC on October 9th and 10th.

Beneath an immense projection of Peter Jackson's film, the 21st Century Orchestra, under the direction of Maestro Ludwig Wicki, will perform Howard Shore's entire Academy Award-winning score. Joining them will be the acclaimed voices of The Collegiate Chorale, The Brooklyn Youth Chorus, and soprano Kaitlyn Lusk.

Tickets for the October 9th and October 10th shows are on sale, and nerds fans coming in from out of town for the shows, and even those who are local, will have plenty of other Tolkien activities to keep them busy while they are here. "FOTR Weekend in New York City" will include the official release of Doug Adams' new book The Music of the Lord of the Rings Films, discussion with Tolkien linguist David Salo, who translated all choral lyrics for The Lord of the Rings scores, and more! Details at TheRadioCityLOTRconcert.com.

The NYC performance is one of several Lord of the Rings - Live to Projection concerts happening around the world. The score's composer, Howard Shore, has conducted some himself, including a performance in April by the London Philharmonic Orchestra, who played on the film's soundtrack. The orchestra is planning an April 2010 performance of The Two Towers in the same space.

Ludwig Wicki, who will be leading the orchestra at Radio City, recently conducted The Two Towers in Germany. The conductor was profiled by a German newspaper, where he described the rigors of conducting music synchronized with a nearly three hour movie...

The trick: Wicki has not just the score in front of him but a laptop as well. There he sees the movie - and more: This is everything he needs and what's confusing the rest of us: colored stripes that move from the left side of the screen to the right, white flashing punches and figures. To quote the movie: One screen to rule them all.

There are almost no breathing pauses for the orchestra and the conductor (the choir has a bit less to do): the movie runs for about three hours, the music for about 2 hours and 40 minutes. "That means, you can barely relax. You're permanently under high tension." conductor Wicki illustrates. Of course, even if there's no music you have to pay attention, otherwise you'd miss your cue. [translated at themusicoflordoftherings.blogspot.com]

More from that article, with live clips of the Lord of the Rings Symphony, which is a reworked version of the music from all three films, below...

April 2009 article on LOTR: The Two Towers - Live to Projection in Germany

Incidentally, Wicki even flew to NY to program the conducting aid and adjusted the Auricle to meet his wishes. "I've tidied it up, so I can focus on the essentials."

The rehearsals were "uncompromising" Wicki says smilingly. On one day from 10am to 5pm and on an other from 10am to 5.45pm. Still, if you attend a rehearsal, you can sense it: Wicki's cheerful, democratic nature appeals to choir and orchestra. "Fortunately, the times of the old, autocratic conductor's stand stars are over." Wicki says.

The Lord of the Rings is pretty much the most difficult piece of its kind - more difficult than conducting one of Chaplin's silent movies, for instance. Wicki explains the difference: "Modern Times, City Lights - they have more consistent musical arcs, coherence. But this [LotR] is all about rhythm changes and tempo changes. For three hours."

What makes this production really expensive is the backup: The movie is shown on the big screen and on Wicki's laptop - to ensure maximum security in case one system fails. It would be fatal indeed if the music would stop right in the middle of the battle of Helm's Deep, wouldn't it? So: To battle! [themusicoflordoftherings.blogspot.com]

The Lord of the Rings: Symphony - The Fellowship

The Lord of the Rings: Symphony - Rohan

The Lord of the Rings: Symphony - The Return of the King