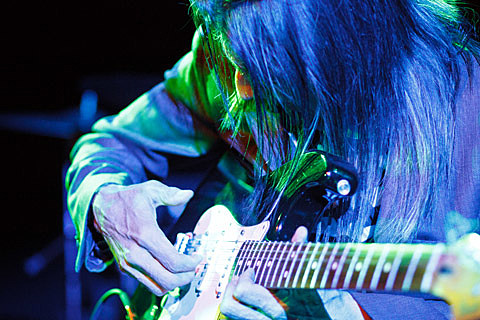 Speaking of Loren Connors, who opens for Jozef Van Wissem tonight, he's releasing a collaborative single with singer Suzanne Langille called I Wish I Didn't Dream on Northern Spy Records. You can order that single and listen to some samples at the Northern Spy website. They'll be celebrating it with a Northern Spy-presented release show in Brooklyn on November 13 at 285 Kent with Text of Light (aka Lee Ranaldo, Alan Licht, and Ryan Sawyer and Tom Carter & Pat Murano. No advance tickets for that one at the moment. $10 at the door.

This isn't the first time that Loren Connors associated with a member of Sonic Youth. Over the summer he played a collaborative set with Thurston Moore as part of Spy Music Festival.

The Yoko Ono, Kim Gordon, and Thurston Moore album, YOKOKIMTHURSTON, is out now. You can stream that in its entirety below via a spotify widget.