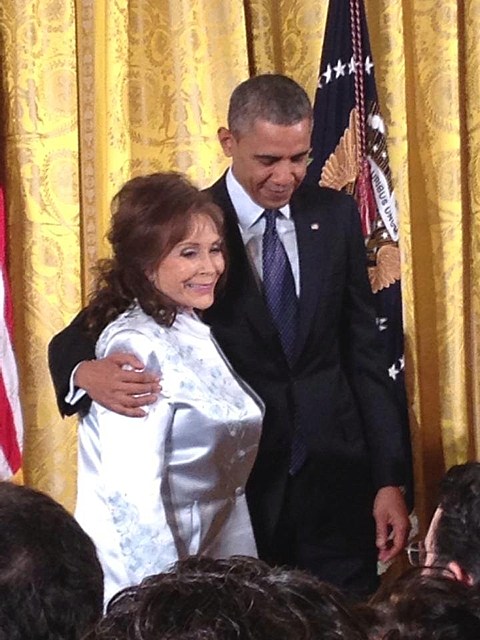 Loretta Lynn joins an elite list of musicians, along with female icons such as Ella Fitzgerald and Aretha Franklin, when she receives the Presidential Medal of Freedom, America's highest civilian honour, on 20 November, 2013.
The 81-year-old unquestionably deserves the honour. The impact Lynn has had on country music goes beyond her bold songwriting and chart success. She was a genuine trailblazer. In naming her, the White House said: "Loretta Lynn is a country music legend. Raised in rural Kentucky, she emerged as one of the first successful female country music vocalists in the early Sixties, courageously breaking barriers in an industry long dominated by men. Ms Lynn's numerous accolades include the Kennedy Centre Honours in 2003 and the Grammy Lifetime Achievement Award in 2010." [Telegraph]

Country music star Loretta Lynn was just awarded the 2013 Presidental Medal of Freedom of Award by president Barack Obama at the ceremony, which is currently ongoing at the White House. That's a picture of Loretta and President Obama above from Loretta's Facebook, where she's been live-facebooking with pictures and statuses saying things like "We're on the way. Today's the big day. It's an honor to be here," and "Just arrived at the White House. ..walking in," and more.

She's being honored along with Bill Cllnton, Oprah Winfrey, Gloria Steinem, Ben Bradlee, and more. You can watch the live stream of the ceremony on Fox News.