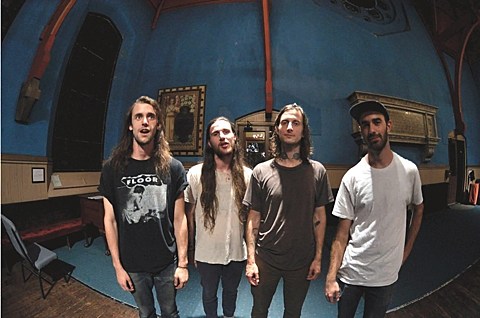 The insanely prolific Patrick Kindlon of Self Defense Family (formerly End of a Year) and Drug Church is also in yet another band, Loss Leader. Here's what Patrick said about the band's formation:

We started when Nick Fit (fill-in guy for Trash Talk and about 50 other bands) approached me to start a band. I told him, "you're the best live bassist I've seen, but you're also a terrible musician. Can you not over-extend yourself and just write shit that is on your level?" He did that and we put out a demo of that type of hardcore you only see on hip festivals.

When we decided to record more, we ended up writing something real different. I'm not sure what it is besides barf-rock. But it's very, very sick.

We're premiering their new video for "Stickman," which comes out on Patrick and Nick's new singles-only label, Anybody's Flowers, which is being distributed by Deathwish. That single, and a new one from Night Sins (the project of Nothing drummer Kyle Kimball), will both be out this Saturday (4/18) and are the label's first two releases.

Patrick's a pretty diverse vocalist, and on "Stickman" he's dishing out raw screams, but they're met by cleaner, airier vocal harmonies and music that's closer to straight rock than hardcore. It's a good mix, as you can hear for yourself below.