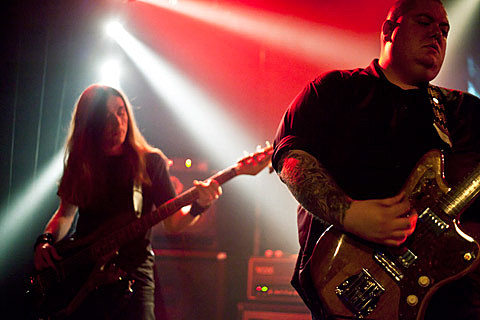 After their injury and subsequent cancellation from last year's megashow with Disma, Oak and Coffinworm, Loss has been itching to make it back up to NYC to make up the lost date. Now the band has done it, and will team with the mighty Pallbearer for a show with Sewer Goddess at Saint Vitus on May 19th! Tickets are on sale for this BV/Order of The Serpent production.

It's Loss's only East Coast appearances thus far and one of only three shows scheduled tor them at the moment. They also play the Gilead Media Festival and Chaos in Tejas.

Loss's Despond landed on my favorites list for 2011 and Pallbearer, who released their debut LP Sorrow & Extinction this week, is currently streaming their excellent LP at NPR. Pallbearer will be down at SXSW this year for shows including a thus-far-unannounced-BV event. We'll keep you up to date. If you missed it, I interviewed both Loss AND Pallbearer in the past year.

Stream all of Despond below.