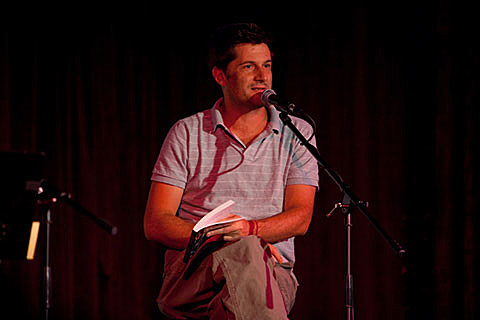 New York, Philly, Boston, Seattle, Portland, Denver and everywhere in between. Come visit me for an evening of storytelling; joke telling; and of course, graphic sexual imagery.

Catch me this February and March in a city near you as I promote my brand new book (that I wrote!), MR. FUNNY PANTS!

Michael Showalter's new book Mr Funny Pants is currently up for pre-order, and the comedian will kick off a promotional tour at the Union Square Barnes & Noble on its release date, 2/24. What's more, Showalter will be joined by Neko Case, who will perform "selections from her new CD" (2009's Middle Cyclone). Showalter is also scheduled to appear at The Book Court in Brooklyn on 3/1 at 7PM, as well as The Bell House on 2/27 (no tickets for that one yet). All dates are below.

Barnes & Noble is currently Neko Case's lone scheduled NYC appearance, though she will play Woodstock on 2/1 and Westhampton Beach on 2/5 as part of a string of dates with Lost In The Trees. Meanwhile Lost In The Trees, who were recently here to open for Junip at Irving Plaza, will play their own show at Joe's Pub this Friday (1/7). Tickets are still available.

Tour dates for Michael Showalter, Neko Case, and Lost In The Trees, as well as some video is below.

--
Lost in the Trees "Walk Around The Lake"