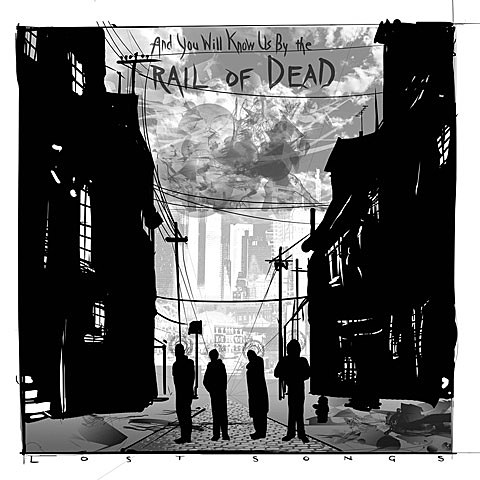 ...And You Will Know Us By The Trail of Dead have announced Lost Songs, the band's new 12-track long-player due October 22 via Richter Scale/Superball Music. Contrary to what the name may imply, Lost Songs is all new material and features the track "Up To Infinity" which is streaming now at Pitchfork. Check out the rest of the tracklisting along with more info below, and look for the release on vinyl, CD, and "Limited Edition 2-CD Mediabook." That's the album art, which makes its world debut in this post, above.

Trail of Dead is currently gearing up to tour the world in support of Lost Songs, including the previously discussed US dates that see them hit Irving Plaza on 11/16 (tickets). Full tour schedule is below. The band is also offering VIP packages for tickets which include a 20-minute meet and greet with the whole band, an exclusive t-shirt, a set of buttons, a a 12" x 12" lithograph of album cover signed & numbered by the band and a cloth bag featuring artwork from the album.

In related news, Jason Reece has also kept busy with his other band Spiritual Wives. Reece & co recently shared a bill with Ringo Deathstarr in Austin, where Jason joined in on the Ringo Deathstarr set too.

Lost Songs release details are below alongside some favorite AYWKUBTTOD tracks.

Lost Songs will be released in three different formats....
• Deluxe Edition - Limited Edition 2CD Mediabook with a 180 page booklet that includes excerpts from "Strange News From Another Planet" and illustrations, both by Conrad Keely. Disc 1 contains the album plus four additional bonus tracks, and Disc 2 contains the segued version of the album with no pauses between the songs.
• Standard Edition - 1CD Jewel Case enhanced with an e-book that previews chapter one of "Strange News From Another Planet."
• Vinyl - 180gram 2LP gatefold vinyl that includes the standard version of the album plus the four additional bonus tracks.

...and you will know us by the trail of dead - will you smile again