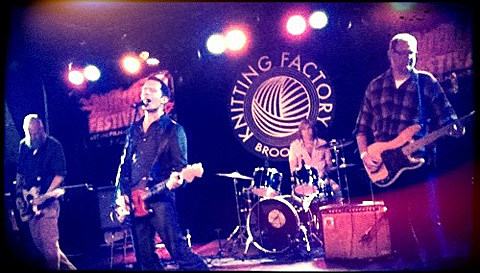 You may remember that '90s-era NYC indie rock band Lotion played their first show in 12 years last October as part of the Royal Flush Festival. The band have decided to make the reunion an annual event and this year's Lotion show happens at Mercury Lounge on October 6. Tickets for that show go on sale Friday, August 17 at noon with an AmEx presale starting Wednesday (8/15) at noon.

I went to last year's show which found the band surprisingly together, given that they had two weeks notice of doing it with members far-flung around the U.S. It was a really fun show. There's video of the band doing "Rock Chick" and "Feedback Queen" at the bottom of this post. With two months notice this year, who knows what may happen.

To make this a little more special (and a "holy crap!" show for some), Lotion have coaxed fellow Clinton-era rockers Edsel out of retirement who played their last show on Valentines Day 2000 at Brownies. Influenced heavily by Wire and other UK post punks, Edsel made dream pop with a decidedly DC-indie bent. The band for this show will be longtime members Sohrab Habibion (who is now in Obits), Geoff Sanoff, and Steve Raskin, plus Obits drummer Alexis Fleisig (filling in for Nick Pellicciotto and John Dugan).

Much of Edsel's back catalog has gotten the reissue-remaster treatment via Comedy Minus One. Last year saw The Everlasting Belt Co. and Detroit Folly, and their final and best album, 1995's Techniques of Speed Hypnosis (recorded in England with MBV engineer Anjali Dutt), will be out in time for the Mercury Lounge show. There are a couple Edsel MP3s you can download above and you can stream Detroit Folly via a Spotify app at the bottom of this post.

Video and streams are below.