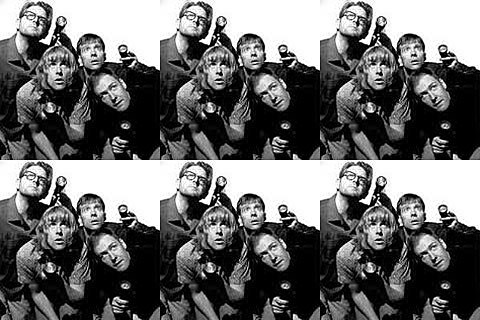 The fifth annual Royal Flush Festival happens at Knitting Factory Brooklyn from October 13 - 17. Hosted by arts/comics/music mag Royal Flush, details are still a little sketchy on the fest's website, but bands include Art Vs Science, Kid Savant and Glitter Freeze. (Not sure about films this year.) Most excitingly, for this writer at least, is that the Royal Flush folks have coerced '90s-era indie rockers Lotion out of retirement for their first show in 12 years on Monday, October 17.

New York City in the 1990s was not the hotbed of local music it is today and apart from Soul Coughing and D Generation and Luna there wasn't a whole lot going on here. What there was of a scene, it mostly happened at Luna Lounge which served as a music industry hangout and place to catch local bands for free. Among them, Lotion were tipped Most Likely to Succeed. They were one of the first "Cute Band Alerts" in Sassy, their debut Full Isaac was named Album of the Year by the Village Voice (though not in the Pazz & Jop poll), appeared on Buffy the Vampire Slayer and, perhaps most famously, got reclusive author Thomas Pynchon to write the liner notes for their 1996 album Nobody's Cool.

Lotion toured with Pavement, Mercury Rev and others and got compared to R.E.M. a lot, which I never quite understood, but they did make some amazingly crafty, complex pop over the course of three albums, all of which are worth seeking out. (They're all out of print but used copies are affordably-priced.) Their live shows were legendary, especially at Luna Lounge which could be loose and boozy and filled with covers. After 1998's The Telephone Album (their best if you ask me), interest fizzled and the band ceased operations a year later.

Singer Tony Zajkowski and drummer Rob Youngberg formed Honeycomb in the early '00s. Honeycomb were equally pop-friendly but added a multimedia element to their shows that made them unique. Honeycomb won some big Best Unsigned band contest around that time, and snuck out an album in 2008 but the project ended shortly after. Zajkowski and Youngberg have formed a new band, Spellbender, that are still gearing up for their live debut.

I don't think Lotion's last show back in '99 was intended that way, so here's your chance to see them. A few choice Lotion cuts (via YouTube) are below.