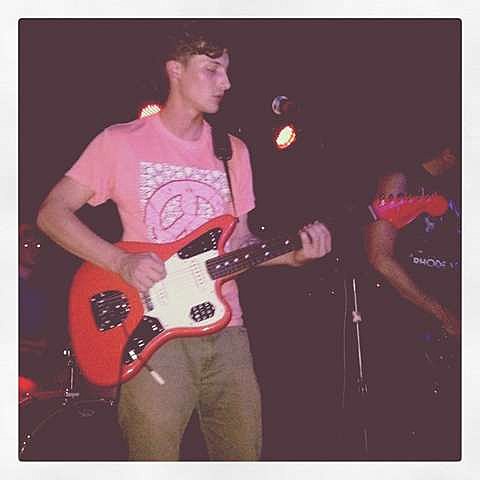 "[Lockett Pundt] doesn't need punk anymore," said his Deerhunter bandmate Bradford Cox in an interview with Pitchfork last year. This came across pretty evidently at Mercury Lounge last night (7/18), where Lockett and band played their first of two NYC shows this week for his Lotus Plaza project. While Bradford is off doing punk things like playing "My Sharona" for an hour at shows, Lockett is more interested in the beautiful than the abrasive. He walked on stage in a peace sign t-shirt and without saying much at all went into a set tinged by the narcotic bloom of shoegaze and post rock.

The band favored atmospheric interludes between songs, only coming to actual stops a couple times throughout the set, blurring the ends and beginnings of each song. Within the thick mesh of swirling guitars which mostly relied on mesmerizing the crowd versus encouraging any kind of dancing or singing along, a few standouts from Lotus Plaza's great 2012 LP, Spooky Action at a Distance, did of course occur. "Strangers" (which came really early in the set), "Jet Out of the Tundra," and "Remember Our Days" sparked the most memorable moments, and after barely leaving the stage the band returned for a one-song encore of what was both the biggest moment of the album and the show, "Monoliths."

I got to the show in time for Ape School's solid opening set. They'll be back in NYC for another show on August 21 at Glasslands with Heaven and Arc in Round. Tickets for that show are available.