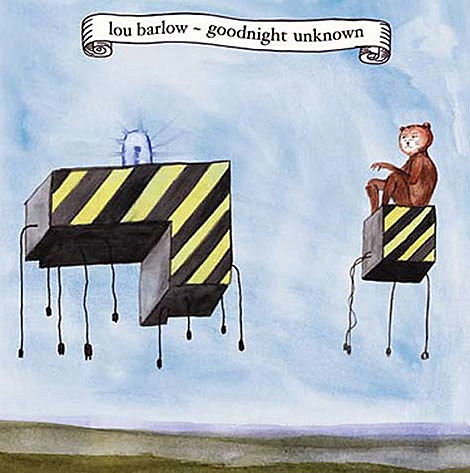 Dinosaur Jr. is playing the last free show of the season at the Central Park SummerStage on Sunday, August 16th with The Walkmen and somewhat newly added opener Saviours (who recently played Union Pool).

Dinosaur Jr.'s Lou Barlow will be heading out with the Missingmen (guitarist Tom Watson and drummer Raul Morales of Mike Watt's band) this fall in support of Goodnight Unknown, his forthcoming solo album on Merge. Most of the dates on that tour will be with Dinosaur Jr. as well. That includes Lou's Pop Montreal performance, but not his NYC stop at the Mercury Lounge on Tuesday, October 6th (the same day the album comes out) (and a mysterious gap in Dinosaur Jr's touring schedule). Tickets for that show go on sale Friday, August 7th at noon.

About the new album, the label writes...

In the four years since his career-redefining, mostly acoustic record Emoh, Lou Barlow has reunited with Dinosaur Jr. and reissued three of Sebadoh's classic albums. But as the brilliant new Goodnight Unknown illustrates, he's hardly living in the past. Borrowing the live-band energy of Dinosaur Jr. and the stylistic reach of Sebadoh, Barlow has built on Emoh's full production and written a set of immediate, melodic pop songs that Lou describes as, "a cross between my later work with Folk Implosion and my earlier work with Sebadoh...to my ears, anyway."

From the surging opening track "Sharing" to the surprisingly soulful performances on "The Right," Goodnight Unknown benefits from Barlow's tunefulness and his decision to record the record relatively quickly, with old friends and new. The Melvins' Dale Crover adds inspired drum work throughout, and Goodnight Unknown's urgent sound owes just as much to frequent Barlow collaborator Imaad Wasif (Yeah Yeah Yeahs, alaska!). The record's considerable power also stems from the new talents on board, including producer Andrew Murdock and Lisa Germano.

"Gravitate" and artwork from the record are posted above; its tracklist is below. Lou recently played XX Merge.

J Mascis will depart from Dino Jr. to play sets at the MBV-curated ATP Nightmare Before Christmas on December 4th-6th in Minehead, UK. For that fest, he'll join Witch (where he plays drums) and perform as J Mascis & The Fog, a group that features Dave Schools and Kyle Spence. Other bands on the fest's stellar lineup are Sonic Youth, De La Soul, Sun Ra Arkestra, Fucked Up and Yo La Tengo, to just name a few. Though tickets are sold out, you should really ogle at the fest so-far lineup (still more to come...), with all tour dates, below...

Goodnight Unknown tracklist
1 Sharing
2 Goodnight Unknown
3 Too Much Freedom
4 Faith in Your Heartbeat
5 The One I Call
6 The Right
7 Gravitate
8 I'm Thinking...
9 One Machine, One Long Fight
10 Praise
11 Take Advantage
12 Modesty
13 Don't Apologize
14 One Note Tone