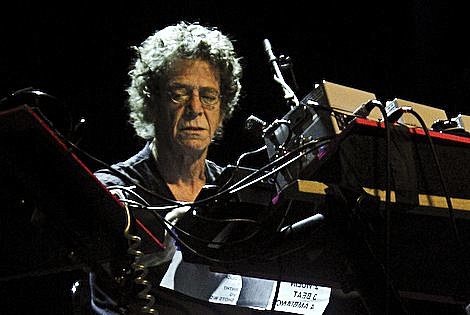 "Lou Reed's (b. 1942) music written for the Velvet Underground propelled him to rock stardom. His Metal Machine Music, a distorted sound wall of guitar feedback, has been called the precursor to punk. Critical rejection at its first release in 1975 led to a cult-like interest. Ulrich Krieger has accomplished a feat once deemed impossible by transcribing and arranging Metal Machine Music for classical instruments"...

Mark your calendar because that program, "Fireworks Ensemble playing Metal Machine Music", is coming to Columbia's Miller Theatre on Friday, February 5, 2010. Tickets are on sale now.

Ulrich Krieger was 1/3 of the Metal Machine Trio that played the Gramercy Theatre in April. (The others on stage were Sarth Calhoun, Reed himself and special guest John Zorn.) That trio has dates later this year in Europe, which are posted below.

This weekend, Reed is at Lollapalooza in Chicago, where he'll play a "songs" set (if you recall, the Metal Machine shows advertised themselves as "No Songs No Vocals" to curb any suspicion about the program).

Reed recently collaborated with Barenaked Ladies instrumentalist Kevin Hearn on a "song about overfishing the oceans stands out like a sore sea-hugger."

Kevin Hearn and Thin Buckle's Havana Winter, released on [July 28th] from Hearn's indie label Celery Music, is nakedly invested in...natural subjects. "Coma," which features Reed on backing vocals and guitar, was inspired by Charles Clover's The End of the Line, an alarming documentary about fishing, technology and extinction. Reed and Hearn use that as a point of departure to also criticize urban sprawl.

Listen to "Coma" at Wired.

Another track, posted above, is a version of Reed's "Perfect Day," originally released on 1972's Transformer, being played on the Riverside Church carillon (a huge mass of bells and the largest of its kind in the world) last April. Why you ask? Here's the description of the event...

Since 1998, Perfect Day can be heard every fifteen minutes on the carillon in Goes, the Netherlands, on every Queen's Day. Sonologist Jorrit Tamminga, son of Sjoerd Tamminga, made a special arrangement for the carillon computer. This is part of the programme on Queen's Day around De Stenen Brug, an art project which has yearly organised a new-style Queen's Day since 1998. On the occasion of the celebration of the excellent American-Dutch relations this local initiative on Queen's Day extends for once to the Netherlands ánd New York. [ny400]

Recently, Lou appeared (in a manner of speaking) at Dean & Britta'a 13 Most Beautiful... show at Prospect Park. Finally, Lou Reed got a shout out of sorts at All Points West, where Echo and the Bunnymen covered his "Walk on the Wild Side."...