"ANARCHY at www.nypl.org/ 2night when the Velvet Underground is oversold and hits max. capacity early. Even tkt holders not allowed in!" - Nerida Brownlee 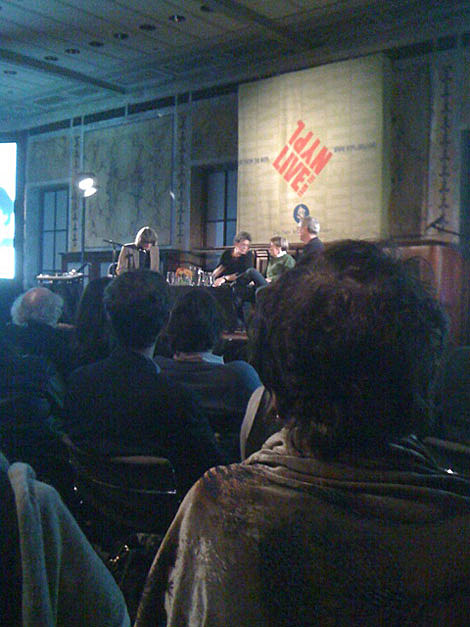 "Yes, the interview conducted by David Fricke at the NY Public Library last night with the remaining members (sans John Cale) of the Velvet Underground was very very good, although it did leave something to be desired. The night began with everyone seated...as the lights were dimmed the volume of the background music increased to an ear piercing level. "Heroin" was played for the entire audience (studio version) at a loud level which was a nice effect and a good way to start the night.

After the song ended and everyone was able to collect themselves (i get the feeling everyone in that audience must have heard Heroin at least a hundred time each because nobody really looked shocked) Lou, Doug Yule, Mo and David Fricke took to the stage.

As far as interviews go this was rather entertaining considering who the subjects were, but to be truthful, Lou was not nearly as candid as I would have liked. A lot of the questions from David were somewhat superficial and re-hashed what is already well documented. However, there were some great moments. You can really tell that Lou appreciates and loves Mo as a friend the way they were able to just "kick it" up there and chat as if nobody else was in the room. Doug didn't speak that much and his answers were very concise. The best part of the night by far was when all three stayed after and signed the book (awesome book!) they were pushing there. They all signed my copy and I was able to shake hands with Lou and tell him how much I appreciated his work, I also told him "shalom" and that sparked a smile on his face.

I'll just add at one point Mo was going on how she thinks the arts are suffering greatly in the city right now, partially due to expensive rent. Lou chimed in saying that there were alot of great bands right now coming from the Brooklyn area and that its lucky for them because all they need is software to generate and record....also Lou stated that he didn't think any other current band out there has the druthers, talent or style to pull off the sound and aesthetic that VU captured....i think Mr. Bradford Cox might take exception to that point.

There were also many references to Warhol. You can tell just the way Lou and Mo spoke about him that they truly loved him and believed he was the seminal figure for the group." [Anonymous]

Some people who bought tickets were given refunds before they even received their ticket. Some were just turned away at the door. Did you get in?

John Cale wasn't there, but you can catch him at an upcoming event at the Museum of Modern Art.