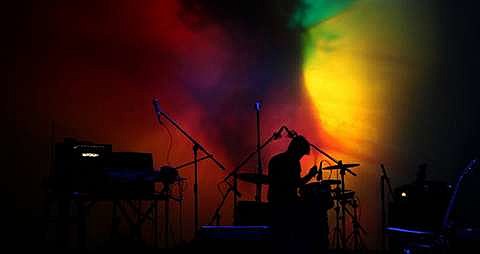 The Joshua Light Show, founded by multimedia artist Joshua White, is perhaps the most legendary group of live music visualists. As resident artists at Bill Graham's Fillmore East during the late 1960's, and in performances at Woodstock, Newport Jazz Festival, Tanglewood, Carnegie Hall, and the classic film Midnight Cowboy, White and his cohorts created live, colorful, psychedelic projections behind the great bands of that era including the Grateful Dead, Jefferson Airplane, Janis Joplin, Jimi Hendrix, The Doors and The Who.

Joshua Light Show is in residence at the NYU Skirball Center from September 13-15. The crew of visual artists will be joined by a different set of musicians each night. The lineups include minimalist composer Terry Riley with guitarist (and son) Gyan Riley, avant-garde heavyweights John Zorn, Lou Reed, Bill Laswell and Milford Graves, and percussionist Evelyn Glennie with experimental harpist Zeena Parkins. The final show features Ben Goldwasser and Andrew VanWyngarden aka the members of MGMT. Tickets are on sale.

The bill here has the members of MGMT billed individually, but they'll be performing as a band at Osheaga Fest on August 3 in Montreal, and at Sands Steel Stage at PNC Plaza in Bethlehem, PA, on August 5. Tickets to that are on sale.

The full schedule and video of a recent Joshua White art installation are below.